Churches of Africa and Asia lead growth of Catholicism worldwide

If you're reading this, chances are you’re one of the 1.166 billion Catholics in the world. 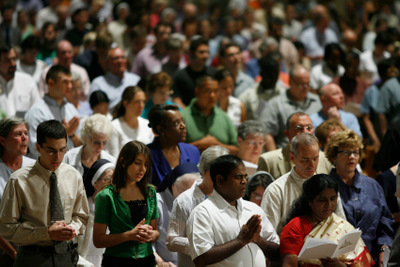 1.166 billion! According to the Vatican Publishing House that is the world Catholic population. The numbers have been published in the Statistical Yearbook of the Church, and the data is based on the time period between the years 2000 and 2008. During those nine years, the worldwide Catholic population has risen nearly 12%. The largest growth occurred in Africa (33%!). This is followed by Asia, Oceania and the Americas. Europe remained stable with only a slight increase. Worldwide, the number of priests has grown slightly to just under 410,000 (nearly 1% growth). The number of seminarians and permanent deacons is up around the world, too. Though women religious are nearly double the number of priests, their numbers are decreasing -- by about sixty thousand in the last nine years. This doesn't apply to Africa and Asia though -- those continents are experiencing tremendous growth not only in women religious but priests and non-ordained religious (e.g. Brothers). Nearly a quarter of the world's priests are in Africa and Asia! Overall, Catholicism is growing worldwide -- from the laity, to ordained priests and bishops, to religious. The Gospel message is being spread to regions that have not heard the Good News, and this is a reason to rejoice! CNS photo/Nancy Wiechec