As the Church celebrates Jesus' victory over death, all of us at Salt + Light Television would like to extend to our readers and viewers our best wishes for a blessed and joyful Easter.
As we begin this Easter season, we invite you to read this beautiful Easter homily by the Bishop, Saint Melito of Sardis from the Office of Readings: 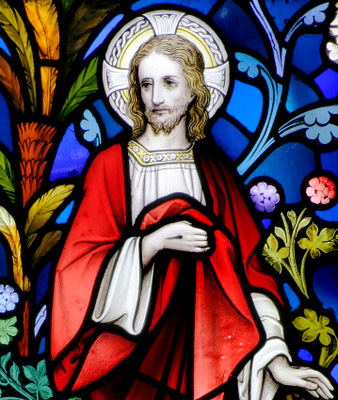 The Lamb that was slain has delivered us from death and given us life There was much proclaimed by the prophets about the mystery of the Passover: that mystery is Christ, and to him be glory for ever and ever. Amen. For the sake of suffering humanity he came down from heaven to earth, clothed himself in that humanity in the Virgin’s womb, and was born a man. Having then a body capable of suffering, he took the pain of fallen man upon himself; he triumphed over the diseases of soul and body that were its cause, and by his Spirit, which was incapable of dying, he dealt man’s destroyer, death, a fatal blow. He was led forth like a lamb; he was slaughtered like a sheep. He ransomed us from our servitude to the world, as he had ransomed Israel from the hand of Egypt; he freed us from our slavery to the devil, as he had freed Israel from the hand of Pharaoh. He sealed our souls with his own Spirit, and the members of our body with his own blood. He is the One who covered death with shame and cast the devil into mourning, as Moses cast Pharaoh into mourning. He is the One who smote sin and robbed iniquity of offspring, as Moses robbed the Egyptians of their offspring. He is the One who brought us out of slavery into freedom, out of darkness into light, out of death into life, out of tyranny into an eternal kingdom; who made us a new priesthood, a people chosen to be his own for ever. He is the Passover that is our salvation. It is he who endured every kind of suffering in all those who foreshadowed him. In Abel he was slain, in Isaac bound, in Jacob exiled, in Joseph sold, in Moses exposed to die. He was sacrificed in the Passover lamb, persecuted in David, dishonoured in the prophets. It is he who was made man of the Virgin, he who was hung on the tree; it is he who was buried in the earth, raised from the dead, and taken up to the heights of heaven. He is the mute lamb, the slain lamb, the lamb born of Mary, the fair ewe. He was seized from the flock, dragged off to be slaughtered, sacrificed in the evening, and buried at night. On the tree no bone of his was broken; in the earth his body knew no decay. He is the One who rose from the dead, and who raised man from the depths of the tomb.