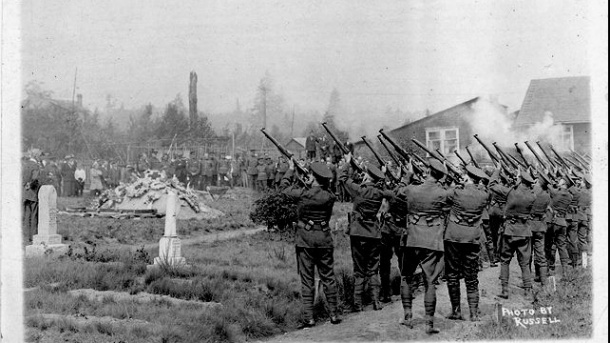 On February 11 we remember the members of the armed forces who lost their lives in the line of duty. The Catholic Cemeteries  of Vancouver came across one Catholic man who served his country in and out of the armed forces as a medical doctor and psychiatrist. After the first World War he dedicated his practice to treating what we know today as Post Traumatic Stress Disorder. This biography comes to us courtesy of Catholic Cemeteries of Vancouver as part of their Celebrating Life series.

It was 100 years ago, 1913, and Dr. Charles Edward Doherty was living a full and influential career in psychiatric medicine as superintendent of the Provincial Hospital for the Insane in New Westminster.
He would soon go on to serve a distinguished career in the Canadian Forces before returning to Canada to work tirelessly on behalf of mentally ill and shell-shocked soldiers.
The irony is that since then we have come far in terms of caring for the mentally ill, and yet the Issues that Dr. Doherty focused his life on remain with us today in the treatment of the mentally ill, as well as soldiers suffering post-traumatic stress disorder.
The military career of Lt. Col. C.E. Doherty did not span many years, but it spanned several continents and affected the lives and the health of thousands of soldiers, helping to set a standard of care for which today’s patients owe a debt of gratitude.
It was under Dr. Doherty that B.C.’s Provincial Hospital  would see the full development of the principles of the “moral treatment of insanity”.
Rest, work, and amusement "judiciously selected" were basic treatment, work was departmentalized, the "hospital" atmosphere was enhanced by using the term ‘nurses’ rather than ‘keepers’ or ‘attendants’, and an attitude of kindness towards the patient was enforced, by dismissal if necessary.
With regard to therapy, all received access to exercise and fresh air. “Patients”, Doherty wrote, “...walk the grounds by the hundreds". Medical treatment - work of all kinds in the shop or on the farm, and recreation - was individualized, with the result that in 1907, Doherty could make the claim that mechanical restraints of all kinds had been abolished.
Dr. Doherty’s short career in medicine began when he earned his medical degree with honours from Toronto University and, immediately following graduation in 1898, joined the staff of Kootenay Lake General Hospital in Nelson, B.C. In 1901 he was appointed assistant superintendent of the Provincial Hospital for the Insane, New Westminster. In 1905 he became superintendent.
But in 1913 he joined the militia as a major in the 104th Regiment, and when World War I broke out the following year, Doherty enlisted immediately in the Canadian Army Medical Corps. He went overseas with the first contingent and after serving one year in France, returned to England as Assistant Director of Medical Services of the Canadian Forces.
In the latter part of 1917 Lt. Col. Doherty returned to Canada and undertook the organization and equipment of the Newmarket Hospital in Ontario. After the war he was active on the executive of the Great War Veterans’ Association of Canada.
When he died at the premature age of 48, his funeral received an extensive write up and photos in the British Columbian newspaper, which described his full military honours, including an RCMP detachment and the 47th Battalion band playing the “Dead March in Saul” wending its way down Sixth Street to St. Peter’s Catholic Church where combined choirs from New Westminster, Vancouver and Maillardville gave a beautiful rendition of “Ave Maria”.
“Preceding the gun carriage was the 47th Battalion band, together with a firing party of fifty returned veterans. Included in the firing party were some eight Imperial army veterans who volunteered their services with their Canadian comrades.
“Following the gun carriage was the late Colonel’s charger with full accoutrements including the riding boots of the deceased reversed in the stirrups. Then came a party of officers….following them were veterans in mufti including representatives of the returned soldier organizations of the province. The impressive service was concluded at the graveside by the firing of three volleys by a party of the Westminster unit, followed by the sounding of the “Last Post” by buglers under Drum-Major Leslie.
“Practically every district of the Lower Mainland was represented at the funeral, officers of various overseas units, together with the officers who had been associated with the deceased colonel in the pre-war days, joining forces to pay their last respects to a brother officer and to one who has taken a prominent part in the upbuilding of the city during the time he has been superintendent of the provincial government institution.”
Today Charles Edward Doherty (Charlie to his friends) is buried at St. Peter’s Catholic Cemetery, high on a hill in New Westminster, British Columbia,  looking east up the Fraser River toward the Coast mountain range.