[The following lecture by Most Reverend Charles J. Chaput, O.F.M. Cap., Archbishop of Denver, was delivered on Tuesday morning, February 24, 2009, to a large gathering of Catholic Business Leaders and public officials at St. Paul’s Basilica in downtown Toronto. It was sponsored by the Archdiocese of Toronto, the Salt and Light Catholic Television Network, Regis College and the Meritus, an Archdiocesan Group for Catholic Business Leaders. Archbishop Chaput was introduced by Fr. Thomas Rosica, C.S.B., C.E.O. of Canada’s Salt and Light Catholic Television Network. Fr. Rosica’s introduction follows the text below. ] 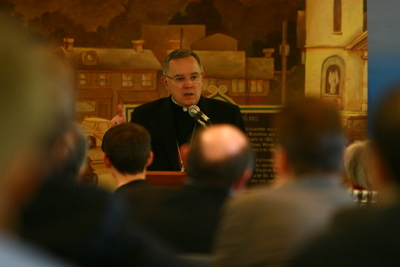 As Catholics we can't be a source of joy and hope for anybody on the outside if we're dimming the light of the Church from the inside with bickering over who we are as a community. If we truly wish to participate in the life of the community we call the Church, we need to stop thinking about the Church as if she were a political organization, social club, or corporation. We need to stop thinking like American consumers and lobbyists, and start thinking like Catholic believers.

In his most recent book Render Unto Caesar: Serving the Nation by Living our Catholic Beliefs in Political Life, the Archbishop urges Catholics to live our faith without compromise and to use our faith as the foundation for renewing our North American society in the twenty-first century. Though written for an American audience, his message extends to all people of good will- including Canadians. Grounding our citizenship in our religious beliefs is not just a right, but also a moral duty and a gift to democratic life. Ladies and gentlemen, please welcome a courageous, young, dynamic and articulate, Franciscan – who is truly a good shepherd: the Archbishop of Denver, Most Reverend Charles Chaput.