For many Catholics, their first encounter with Cardinal John Henry Newman is on a university campus. It’s a natural association, given Newman’s experience as a rector, which informed his volume of discourses The Idea of a University. 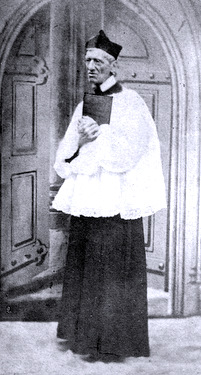 Still, I was surprised to learn, while researching for Catholic Focus, that the first Newman Club was established just three years after his death at the University of Pennsylvania.
Few Canadian students with a devotion to Newman will be able to attend his beatification in Birmingham, England (though Fr. Dean Henderson and Fr. Raymond DeSouza, Catholic chaplains of the University of Victoria and Queen’s University, respectively, will both be there). Many more will be watching from afar. This Sunday, S+L will broadcast the liturgy live at 5 am ET / 2 am PT, repeating at 8:30 pm ET / 5:30 pm PT. In the coming weeks, Catholic campuses across the country will be offering special events to mark the occasion. The campuses are united under the banner of the Canadian Catholic Campus Ministry (CCCM) and the Canadian Catholic Students’ Association (CCSA), which were founded in 1942 as the Canadian Newman Federation. A CCCM/CCSA press release announces:

Vancouver - Sunday, September 19th: At the University of British Columbia, Archbishop Michael Miller will be presiding at a special mass celebrating Cardinal Newman hosted by St. Mark's College, the Newman Club at the University of British Columbia (est. 1940), and the Newman Association. Saskatoon - Sunday, September 19th: At St. Thomas More College, the Newman Centre (est. 1926) will celebrate with a special mass and dinner. Toronto - Thursday September 23rd: At the University of Toronto Newman Centre, there will be a special evening celebrating Saints of the New Millenium – Venerable John Paul II, Venerable John Henry Cardinal Newman and Blessed Brother André in conjunction with the Office of Catholic Youth and Salt + Light Television. Montreal - Saturday, October 2nd: At McGill University, the Newman Student Society (est. 1929) will host a Beatification Blast, which will include a truly celebratory mass complete with reflections, prayers and music from Cardinal Newman.

The Oratory of St. Philip Neri (the Toronto chapter of Newman’s congregation) is also welcoming Newman devotees. On Sunday, October 3rd at 11:30 am, the Church of Saint Vincent de Paul is having a special Solemn High Mass (Usus Antiquior) in the new Blessed’s honour. This past Wednesday night on Catholic Focus, I interviewed Fr. Jonathon Robinson, the superior of the Toronto Oratory, as well as members of Toronto’s Newman Centre. The program re-airs Saturday at 7 & 11 pm ET / 8 pm PT.