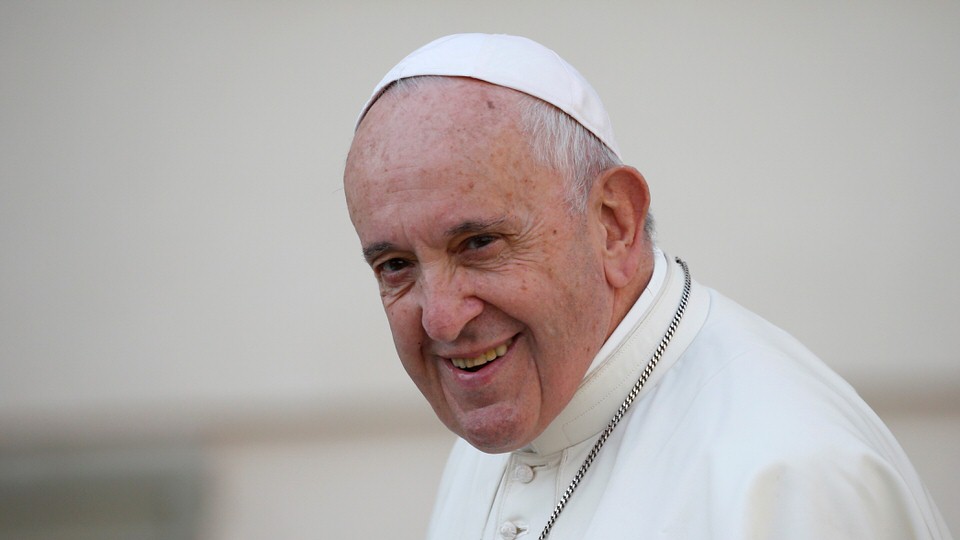 Pope Francis smiles as he arrives to lead his general audience in St. Peter's Square at the Vatican on November 6, 2019 (CNS photo/Paul Haring)
Today, March 13, 2020, is the seventh anniversary of the election of Pope Francis, 266th pontiff of the Roman Catholic Church. And only two days ago was another very important anniversary. It was on March 11th, 1958, that Jorge Mario Bergoglio entered the novitiate of the Society of Jesus. Seven years as Bishop of Rome, as pastor of the world, years in which, as a revolutionary of tenderness, he tried to awaken consciences and ways of being. The Holy Father has constantly looked after the elderly, the poor with their desperate cry for help, and migrants: people who are increasingly marginalized, victims of the "disposable" mentality that Pope Francis has been trying to fight for years, condemning it at every opportunity. His calls for the necessity of an ecological conversion as a consequence of the care of creation and of Our Common Home have found practical confirmation with the recent Synod on the Amazon, yet another real demonstration of an attention that never ends in words alone. There are other themes central to this pontificate: saying no to worldliness as well as to “parrot” Catholicism, two expressions often heard during Pope Francis’ homilies at Santa Marta. He is always in favour of closeness, listening, and forgiveness. Never engage in dialogue with the Devil because "temptation is the attempt to walk paths that are alternative to those of God," the Holy Father observed a few days ago at a recent Angelus – a new exhortation to keep our faith and our eyes on Jesus, always. Young people as the today of the Church and not the future, and also interreligious dialogue, have marked Pope Francis’ agenda, characterized by 32 apostolic journeys and 51 countries visited, the next one being Malta on May 31st. During weeks of anxiety and fear, with a virus that forces us to change our habits, the pope's prayer, "Oh Mary, we entrust ourselves to you", resounds as a faithful manifesto of this pontificate: seven years that have never been mundane but always intense and deeply didactic.

To help you celebrate seven blessed years with Pope Francis, Salt + Light TV will be airing two original documentaries back to back on Saturday, March 14!

Subscribe to Salt + Light TV, Canada's National Catholic TV Network, available on most cable and satellite carriers across Canada. To find out what channel we’re on or how to subscribe, click here. To watch our live broadcast online, click here.