Two years ago, the bishops of the world drafted a list of 55 recommendations about the Word of God. Pope Benedict XVI has now issued his long-awaited response: Verbum Domini (“The Word of the Lord”). The Post-Synodal Apostolic Exhortation represents the final outcome of the Synod of Bishops on the Word of God, which convened in Rome in 2008. 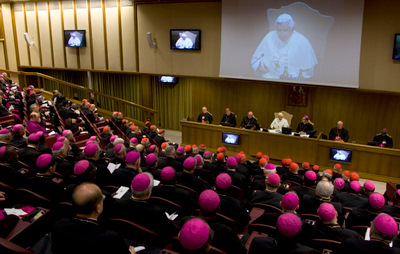 The Pope weighs in on the proper exegesis of the Word of God. He warns against an overly secular reading of Scripture in biblical studies that, in turn, can provoke opposite “fundamentalist” interpretations. The document also examines the role of Scripture in interreligious dialogue with Muslims and Jews, emphasizing the protection of freedom of religion and conscience. Practical considerations include the use of Scripture in preparing homilies, as well as the promotion of Lectio Divina—the prayerful, meditative reading of the Bible, as practiced by Archbishop Thomas Collins of Toronto in his televised series. The 200-page document can be read on the Vatican website, or you can read a synthesis from the Vatican Information Service. Cardinal Marc Ouellet was present for the news conference announcing the document’s release. (H2onews has published video from today’s event.) As the relator-general of the 2008 synod, the then-Archbishop of Quebec City oversaw the preparation of the major documents, including the list of propositions given to the Pope for consideration. The bishops of Canada were quick to applaud the papal document as “a major impetus in the ongoing renewal and life of the Church”. Bishop Pierre Morissette, president of the Canadian Conference of Catholic Bishops and leader of the diocese of Saint-Jérôme, issued the following response this morning:

The Catholic Bishops of Canada welcome the new Apostolic Exhortation Verbum Domini (The Word of God). These reflections by the Holy Father will be a major impetus in the ongoing renewal and life of the Church, universally and in our own country. Catholics, as well as other Christians, were already enriched and encouraged by the deliberations of the Synod of Bishops on the Word of God in the Life and Mission of the Church. This Apostolic Exhortation distills the impetus and recommendations of that 2008 Synod. “The Church has always venerated the divine Scriptures just as she venerates the body of the Lord, since, especially in the sacred liturgy, she unceasingly receives and offers to the faithful the bread of life from the table both of God's word and of Christ's body” (Second Vatican Council, Dogmatic Constitution on Divine Revelation, Dei Verbum, no. 21). Saint Augustine wrote that when the Church and its members read and meditate on the Scriptures, our minds are enlightened, our wills strengthened and our hearts set on fire with the love of God. Vatican II encouraged a deeper understanding of the Scriptures. This is a major reason why the Council had such impact on pastoral life, catechesis, preaching, ecumenism and Christian witness. As did the Second Vatican Council, so also may this Apostolic Exhortation of Pope Benedict XVI. May it inspire all the Church today to reclaim the enthusiasm and mission of Pentecost, and be ever more determined to renew the face of our earth -- in faith, hope and love.