Catholic-on-Catholic martyrdom: a new reality in the Church today 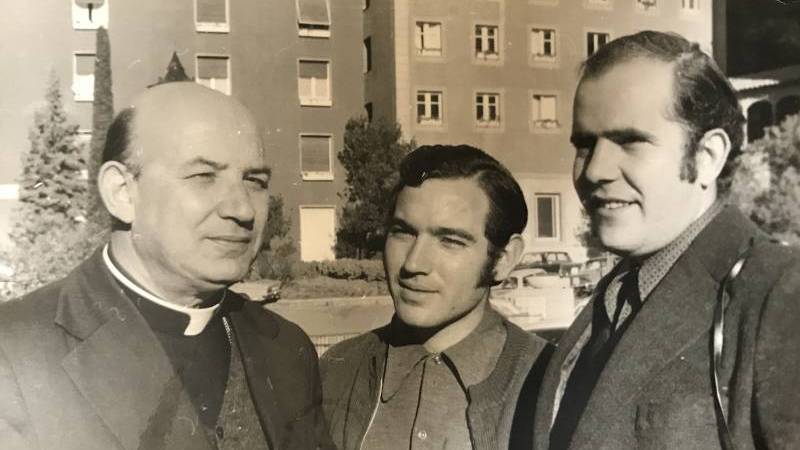 Bishop Enrique Angelelli Carletti of La Rioja, Argentina, is shown in a 1974 photo taken in Germany with two collaborators from his rural movement ministry, which promoted co-ops for small farmers. The bishop's vehicle was run off the road by assassins in 1976. (CNS photo/courtesy of Rafael Sifre)
One of the most interesting books we’ve featured on Subject Matters is a work of sociology. The Catholic Church and Argentina’s Dirty War by Boston College’s Gustavo Morello, SJ, is a vivid and unsettling study of the kidnapping and torture of an American priest, Fr. James Weeks, and five seminarians by a right-wing (and “Catholic”) military dictatorship in 1976. Through the brutal experience of these men—some of whom he interviewed for the book—Morello raises key questions about “catholicity” during Argentina’s Dirty War period: namely, why was the hierarchy silent in the face of such wide-spread atrocities? And how did the victims, perpetrators, and bystanders each understand their own “Catholicism”? (Remember that Argentina was about 90% Catholic in the late 1970s). This excellent book came to mind this past Saturday, April 27, as Cardinal Angelo Becciu, the Prefect of the Congregation for the Causes of Saints, presided over a beatification ceremony of four martyrs of Argentina’s Dirty War: Bishop Enrique Angelelli, Fr. Carlos Murias, Fr. Gabriel Longueville, and lay catechist Wenceslao Pedernera. In his homily during the ceremony, Cardinal Becciu said the four men were killed “because of their active efforts to promote Christian justice”—an increasingly common quality of contemporary martyrdom. But it is especially significant as an official declaration that deviates from the traditional definition of a martyr as someone killed in odium fidei, meaning “in hatred of the faith”. This expanded definition of martyrdom is an important step forward in our collective Catholic consciousness. In the last fifty years, people have been killed for their Christian witness to solidarity, justice, peace, and charity—themes and virtues that spring directly from the Gospel. The beatification and canonization of Archbishop Oscar Romero in recent years is the archetype for this development. His postulator, Archbishop Vincenzo Paglia went so far as to call Romero “a martyr of the church of the Second Vatican Council,” an historic event in which the hierarchy of the Catholic Church recognized and emphasized the Gospel demand of working for liberation from all forms of injustice. Certainly, there are contemporary martyrs who are killed for being Christian. But more and more, contemporary martyrs are being killed for living out their Christianity. Perhaps most bewildering about the violence committed against Fr. James Weeks and the seminarians, Bishop Angelelli, Fr. Carlos Murias, Fr. Gabriel Longueville, Wenceslao Pedernera, and Archbishop Romero, is the lingering question raised in Fr. Morello’s book: How can we make sense of such Catholic-on-Catholic violence? The death squads of General Jorge Videla in Argentina, who kidnapped and tortured the subjects of Fr. Morello’s book and the four men beatified on Saturday, were professed “Catholics,” and in their own minds were defending Christian civilization from the communist ideology. They rejected the idea that the work of people like Fr. Carlos Murias and Fr. Gabriel Longueville in promoting integral human development among the poor in La Rioja, was based on fundamental Gospel principles. We cannot say a murderer and his victim both confessed the same faith and that that faith motivated their actions. Clearly there were deeper, ulterior motives. These modern martyrs teach us an important contemporary lesson: it is very possible to misrepresent the Catholic faith we profess when social, political, cultural, or economic interests are prioritized over fundamental Gospel values. Finally, by broadening our conception of martyrdom we also see how “death” manifests itself beyond the physical. When Pope Francis greeted Salvadoran pilgrims at the Vatican after Romero’s beatification in October 2015, he said:

“Archbishop Romero’s martyrdom did not occur precisely at the moment of his death; it was a martyrdom of witness, of previous suffering, of previous persecution, until his death. But also afterwards because, after he died — I was a young priest and I witnessed this — he was defamed, slandered, soiled, that is, his martyrdom continued even by his brothers in the priesthood and in the episcopate… Only God knows the history of people and how many times people who have already given their life, or who have died, continue to be scourged with the hardest stone that exists in the world: the tongue.”

We live in a new age of martyrs, replete with various forms of Catholic-on-Catholic violence. That violence can range from brutal physical torture to gossip and slander. The real, and profoundly unsettling, question to ponder is: what are the deeper, ulterior motives of those Catholics who destroy other Catholics in one way, shape, or form, in the name of Catholicism?