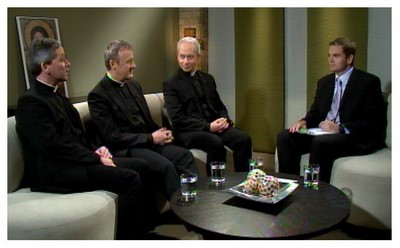 One probably wouldn't expect three Roman Catholic priests to be the top of the world's music chart, but that's the case with three talented clergyman from Ireland. Fathers Eugene and Martin O'Hagan and Father David Delargy are collectively, and fittingly, known as The Priests, and they're topping charts in Europe where their self-titled classical debut album has been warmly received (in fact they've just become the fastest selling Classical debut in the UK!). The three were in Toronto earlier this month, and Salt + Light Television had the opportunity to film their concert. The concert will premiere on December 23rd (click HERE for additional dates and times), but you can tune in to Focus this Wednesday as the Priests join us in studio for an interview. The three share their story. The show also features the Priest's performing two of their songs at St. Paul's Basilica in Toronto. It was a pleasure to sit and chat with the three -- they were very warm, humble, and enthusiastic. I was particularly touched when they recalled the influence their family had on their musical development and on their vocations to the priesthood. Certainly a witness to the importance of family! Their desire to "put out into the deep," and to reach people with music was admirable. Watching them perform, and talking to them, reminded me that God has blessed all of us with gifts, and it is a wonderful honour to use these gifts for the glory of God! You can can catch Catholic Focus: The Priests, Wednesday, December 17th at 7pm and 11pm ET, with an encore presentation this Sunday, December 21st at the same times.