Catholic Focus: The Light of the East

At least one year ago, I participated in one of the most meaningful liturgies I’ve ever been to in my life, at St. Elias Ukrainian Catholic Church in Brampton, Ontario. I remember going with excitement, because the architecture and iconography in these Eastern Churches are just incredible. “Heaven on earth” as a description of Eastern liturgies is very appropriate. I really felt the worship and adoration of God, the sense of connection with history and tradition. 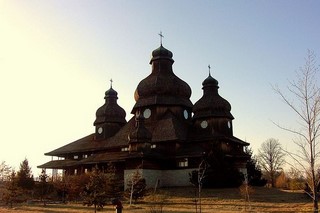 There have been some revelations I’ve received about the role of the Eastern Churches in my Catholic faith life. In 1995, Pope John Paul II wrote an apostolic letter called Orientale Lumen (which is “The Light of the East” in English). In it he says that the Catholic Church needs to breathe with both lungs, Western (Roman) and Eastern, and that the full manifestation of the Church's catholicity is preserved and grows in the life of the Churches of the East as in the West. This means I’ve got to educate myself about the Eastern churches if I am to understand the fullness of my faith. And so I produced the Catholic Focus episode The Light of the East: Understanding the Eastern Catholic Churches, part 1 which airs on Salt + Light Television on Thursday, December 17th and Sunday, December 20th, at 7 and 11 pm ET. We filmed the gorgeous liturgy at St. Elias, and we discuss the Sunday liturgy with Fr. Roman Galadza, Fr. Protodeacon David Kennedy and parishioners in light of Orientale Lumen. I talk about iconography with Bishop David Motiuk, the Ukrainian Catholic Eparch of Edmonton; with Fr. Michael Kowalchyk of St. Josaphat’s Cathedral and Fr. Anton Tarasenko of St. George the Martyr Church in Edmonton; and with Kateryna Chalyk, an iconographer in Toronto. Join me on December 17th and 20th as I explore the identity of the Eastern Catholic Churches. AND stay tuned for Part 2 in 2010 as I visit the Metropolitan Andrey Sheptytsky Institute in Ottawa, an Institute that specializes in spreading information on the Christian East. In this second part, you’ll hear personal stories from teachers and students of both the Eastern and Western traditions. But first things first, and that’s part 1 -- this Thursday. See you then!