Catholic Focus: The Church in India

A vibrant reality filled with life. 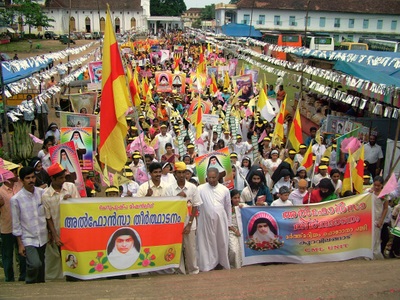 That’s how John Paul II described the Church in India. Like many parts of the world, there are difficulties, but the faith is strong, fervent, and alive. In tonight's episode of Catholic Focus I speak with Archbishop Albert D'Souza.  He's the head of the Archdiocese in Agra in the northern part of the country.  In his region the population is 27 million -- while only 16,000 identify themselves as Christian!  We discuss Christian persecution in India, the importance of inter-faith dialogue, and signs of hope for the faith. We also highlight a popular Shrine in the south of the country, and explore an important religious celebration that honours the Birth of the Virgin Mary. That’s all Wednesday, October 20th, on Catholic Focus: A Vibrant Reality -- the Catholic Church in India, at 7:00pm/11:00pm ET or 8pm PT, with an encore presentation Sunday, October 24th at the same times.