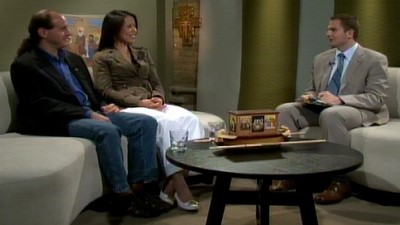 Covering the 49th International Eucharistic Congress was an intense experience -- long hours, little sleep, an abundance of sights and sounds. I left Quebec City pleased yet exhausted... and after the closing Mass... wet and a little muddy. Upon returning to Toronto I began reading through the notes I had taken during that week at the twenty plus catechetical and witness talks, and homilies that were given. The material that was presented in those talks is incredible! To read over the texts, away from the rush of covering the event, and to contemplate just what was being said was a delight. And so a Catholic Focus was born! I rounded up S+L producers Pedro Guevara Mann and Mary Rose Bacani in studio to reflect on some of the powerful and profound words that were spoken during the week, a week that unwrapped and explored the incredible Gift of God given to us in the Eucharistic. We play clips from Archbishop Donald Wuerl, of the Archdiocese of Washington, D.C., and Bishop Luis Tagle of the Diocese of Imus, Philippians. Mary Rose also profiles the Congress' 'Penitential City' in a segment originally seen during the week on Zoom. Join us Thursday, September 18th, and Sunday September 21st, at 7pm and 11pm ET for our Catholic Focus episode "Unwrapping the Gift of God: Reflecting on the IEC".