On April 19, 2005 when Cardinal Joseph Ratzinger was elected pope, the popular consensus was that this would be a papacy of continuity; he would ensure that his predecessor's line of leadership and teaching would be safeguarded. 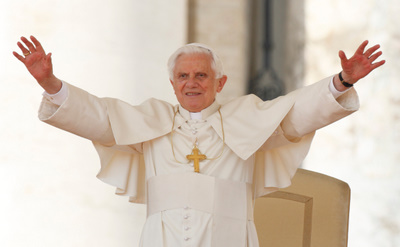 What most people didn't take into consideration was that Cardinal Ratzinger is a very different personality than Cardinal Wojtyla. It is not to be forgotten that Wojtyla was a theatre actor while Ratzinger was a classical musician and academic. Though both Cardinals shared a firmness and clarity of faith, their different personalities would make for rather different papacies. In a new episode of Catholic Focus, Alicia Ambrosio looks at the first five years of Pope Benedict XVI's papacy. Philippa Hitchens of Vatican Radio shares what she's noticed about Pope Benedict's travels since 2005. Scott Hahn of the Franciscan University of Steubenville shares his insights into the Pope's theology and writings. Mordechay Lewy, the Israeli ambassador to the Holy See, talks about the current state of Catholic-Jewish relations, and Fr. Mark Francis of the Pontifical Liturgy Institute talks about the liturgical changes this papacy has brought with it. Tune in Wednesday May 4 at 7:00pm or 11pm ET, or Saturday, May 8th at the same times, for Catholic Focus: Five Years with Pope Benedict XVI. - CNS photo/Paul Haring