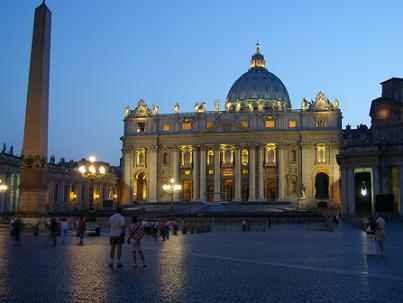 On April 15th, Ron Howard's latest film adaptation hit the big screens. This time he brought to life Dan Brown's thriller Angels & Demons. I read the book about two years ago while I was living in Rome. I would describe the book as a page-turner, the exact type of book you'd like to be reading if you're stuck on an airplane for eight hours with nothing to do--indeed, the book was passed on to me by a friend who had read it on her flight to Rome. I was naturally curious when I heard that a film adaptation was in the works. In fact, shooting began in Rome while I was still living there, but alas, I did not run into Mr. Hanks, or Mr. Howard, or Mr. Brown.
There are some blatant geographical and ecclesiological errors in the novel, some of which are corrected in the film, some not. Brown's story also introduces the complex relationship between faith and science as a framework on which to build the rest of the story. Given the hype that has surrounded the film and the controversy that some have tried to stir, I decided to take a closer look at Angels & Demons to sift through the fiction and get at the truth behind the story. I sat down with two scientists who also happen to be Jesuits: Fr. Rob Allore, a geneticist, and Br. Jonathan Stott, a physicist who is about to take up a post with the Vatican Observatory in Houston, Texas. We explore the idea of having a double calling as priest and scientist. We'll also get the true story of Copernicus and Galileo from Fr. John Comiskey of St. Peter's Seminary in London. Finally, Salt + Light's Rome correspondent Kris Dmytrenko gives us a quick tour of the key Roman monuments featured in the story. Join me this Sunday, May 24th for Catholic Focus: Angels & Demons, airing at 7:00 pm (ET).