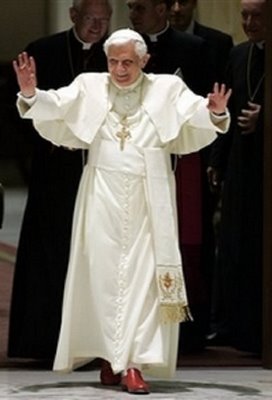 In his last General Audience before a summer vacation, Pope Benedict XVI spoke about his new encyclical Caritas in Veritate.
The social encyclical was released on Tuesday; the full text is available HERE (or a summary of points released by the Vatican HERE). During the Audience the Pontiff explained that:

Charity in truth is the principal driving force behind the authentic development of every person and of all humanity. ... Only with charity, illuminated by reason and by faith, is it possible to pursue development goals that possess a more humane and humanising value.

He stressed "upright men and women are needed, both in politics and in the economy, people sincerely concerned for the common good.” The Holy Father was realistic about the purpose of this document:

Caritas in veritate does not seek to offer technical solutions to the enormous social problems of the modern world. ...What it does do is recall the fundamental principles that are indispensable for building human development over coming years.

At his General Audience he also had two specific intentions: "that this Encyclical may help humankind to feel itself to be a single family, committed to creating a world of justice and peace". He also asked for prayers for members of the G8 who have gathered in L'Aquila, Italy: “May this important world summit generate decisions and directives that serve the true progress of all peoples, especially the poorest.” After this week the General Audience will be on a two week break until the beginning of August. The Holy Father will travel to a village in the northwestern Alps of Italy, after which he will stay in Castel Gandolfo, the papal summer residence, until sometime in September. You can catch the General Audience in English on Thursdays at 3:30pm ET and 8:30pm ET on Salt + Light Television.