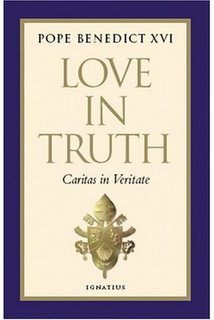 In the third chapter of Caritas in Veritate, which addresses moral considerations of the economy, the Holy Father evaluates the mixed record of globalization. He cautions that “blind opposition would be a mistaken and prejudiced attitude” that would lead to the neglect of “many opportunities for development” (42). Yet, the faithful should keep in mind both the best and worst-case scenarios, neither of which is implausible:

The processes of globalization, suitably understood and directed, open up the unprecedented possibility of large-scale redistribution of wealth on a world-wide scale; if badly directed, however, they can lead to an increase in poverty and inequality, and could even trigger a global crisis. (Paragraph 42)

The Pope makes clear that “labour and technical knowledge are a universal good” (42) that can be exported to the benefit of receiving populations. Still, he cites Paul VI in Populorum Progressio (42) in cautioning that this outsourcing must not be exploitative.

It is not right to export [labour and technical knowledge] merely for the sake of obtaining advantageous conditions, or worse, for purposes of exploitation, without making a real contribution to local society by helping to bring about a robust productive and social system, an essential factor for stable development. (40)

Though potentially beneficial to shareholders, foreign labour forces can “weaken the company's sense of responsibility towards the stakeholders — namely the workers, the suppliers, the consumers, the natural environment and broader society.” (40) He again refers to Paul VI in reaffirming that globalization must help extract people from poverty, rather than perpetuate it to ensure an eager workforce:

For a long time it was thought that poor peoples should remain at a fixed stage of development, and should be content to receive assistance from the philanthropy of developed peoples. Paul VI strongly opposed this mentality in Populorum Progressio. (42)

Of particular interest to Canada, whose economy relies to great extent on the export of goods and natural resources, the Pope warns against protectionist overreactions against globalization:

The world-wide diffusion of forms of prosperity should not therefore be held up by projects that are self-centred, protectionist or at the service of private interests. (42)

Certain corporate practices have become so prevalent that many view globalization as an inevitable force, rather than a trend subject to human decisions. This deprives us of a sense of responsibility to be able to contemplate and manage globalization:

We should not be its victims, but rather its protagonists, acting in the light of reason, guided by charity and truth. […] If globalization is viewed from a deterministic standpoint, the criteria with which to evaluate and direct it are lost. As a human reality, it is the product of diverse cultural tendencies, which need to be subjected to a process of discernment. (42)

Quoting John Paul II’s 2001 address to the Pontifical Academy of Social Sciences, Pope Benedict judges that, ultimately, globalization is “neither good nor bad," but rather "will be what people make of it” (42). Appropriate to an encyclical that envisages a role for theistic truth in all levels of society, the Holy Father defines just how this ideal globalization should operate:

A sustained commitment is needed so as to promote a person-based and community-oriented cultural process of world-wide integration that is open to transcendence. (42)