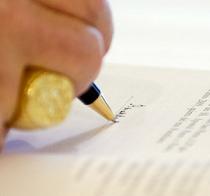 If there was ever a poor choice for speed-reading, it's Caritas in Veritate. Yet, like a few of my colleagues and most Catholic journalists the world over, I was furiously attempting to plough through a very dense embargoed text to prepare notes on the sections pertaining to the economic matters. Doing so felt akin to guzzling fine scotch, or hastening your tattoo artist.
In any event, I share with you my notes for Chapter 3: “Fraternity, Economic Development and Civil Society”, in which Pope Benedict XVI begins by reiterating that even the economy is subject to Original Sin.

The conviction that the economy must be autonomous, that it must be shielded from “influences” of a moral character, has led man to abuse the economic process in a thoroughly destructive way. In the long term, these convictions have led to economic, social and political systems that trample upon personal and social freedom, and are therefore unable to deliver the justice that they promise. (Section 34)

The Pope is seeking a third way instead of approaching economic questions as simply a question of more or less government intervention. He suggests that, for a time, a binary market-plus-State approach may have been able to create and subsequently redistribute wealth. This was advocated “somewhat ahead of its time” by Rerun Novarum in 1891 as a response to the Industrial Revolution. This system has been compromised by the rise of multinational corporations and he adds that it’s clearly not satisfying "the demands of a fully humane economy" and is even “corrosive to society” (39):

Perhaps at one time it was conceivable that first the creation of wealth could be entrusted to the economy, and then the task of distributing it could be assigned to politics. Today that would be more difficult, given that economic activity is no longer circumscribed within territorial limits, while the authority of governments continues to be principally local. (37)

The solution to underdevelopment is "a profoundly new way of understanding business enterprise" (40), which he defines as the incorporation of values of solidarity, fraternity, gratuitousness, communion—“charity”—into the market, State and civil society:

In order to defeat underdevelopment, action is required … above all on gradually increasing openness, in a world context, to forms of economic activity marked by quotas of gratuitousness and communion. (39)

He clarified that while John Paul II wrote in Centesimus Annus that this “economy of gratuitousness” is most naturally applied in civil society, it does also belong in the market and State (38). Further, just as gratuitousness does not pertain only to the private sector, neither is the State solely responsible for ensuring the just distribution of wealth:

Solidarity is first and foremost a sense of responsibility on the part of everyone with regard to everyone, and it cannot therefore be merely delegated to the State. While in the past it was possible to argue that justice had to come first and gratuitousness could follow afterwards, as a complement, today it is clear that without gratuitousness, there can be no justice in the first place. (38)

This “logic of the unconditional gift” (37) must be incorporated into economic activity, rather than the recipients of wealth simply giving charitably after-the-fact:

The Church's social doctrine holds that authentically human social relationships of friendship, solidarity and reciprocity can also be conducted within economic activity, and not only outside it or “after” it. (36)

In a practical application, the Pope advocates partnerships between the public and private sectors, between non-profit and for-profit enterprises. These"hybrid forms of commercial behaviour" could go a long way towards "civilizing the economy" (38). Yet, going back to Original Sin and individual morality, charity cannot truly be legislated, nor fully incorporated into an economic model:

The Pope then addresses one of the main critiques of capitalism, that corporations are effectively discouraged from ethical business practices by their obligations to shareholders:

Without doubt, one of the greatest risks for businesses is that they are almost exclusively answerable to their investors, thereby limiting their social value. […] Business management cannot concern itself only with the interests of the proprietors, but must also assume responsibility for all the other stakeholders who contribute to the life of the business: the workers, the clients, the suppliers of various elements of production, the community of reference. (40)

Revolving-door management compensates executives for quick results, rather than the fulfillment of long-term responsibilities:

In recent years a new cosmopolitan class of managers has emerged, who are often answerable only to the shareholders generally consisting of anonymous funds which de facto determine their remuneration. [...] Owing to their growth in scale and the need for more and more capital, it is becoming increasingly rare for business enterprises to be in the hands of a stable director who feels responsible in the long term, not just the short term, for the life and the results of his company… (40)

The Pope even calls to mind the risky investments and irresponsible lending that have led to the present financial crisis:

What should be avoided is a speculative use of financial resources that yields to the temptation of seeking only short-term profit, without regard for the long-term sustainability of the enterprise, its benefit to the real economy and attention to the advancement, in suitable and appropriate ways, of further economic initiatives in countries in need of development. (40)