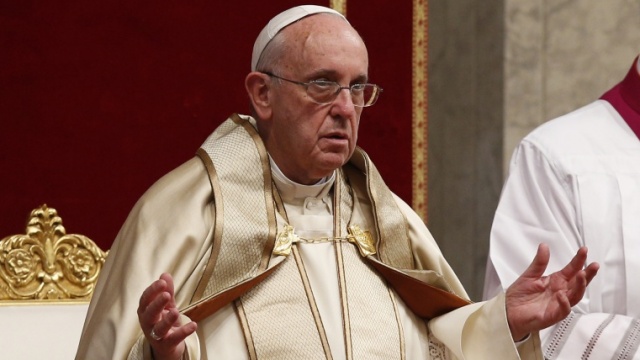 The summer is coming to a close and the Vatican is getting back into its typical routine.   Pope Francis, unlike his predecessors, never takes much of a break during the summer, despite frequent prompts coming from his inner circles: those concerned his busy schedule will negatively affect his overall health…and theirs.  But, as Austen Ivereigh recently argued quite convincingly, Francis doesn’t necessarily need to take a vacation in order to “take a break”. That means lots has happened over the past month, and a few developments in particular have stood out to me.  I mentioned that Francis’ inner circles frequently encourage him to slow down.  They’re concerned about his health, for sure, but they’re also concerned about his vision for the Church.  When some of his closest Cardinal advisors who strongly support and promote his reform of the Vatican bureaucracy and overall vision for the Church tell the Holy Father to “take a break”, they know that the Pope’s physical, mental and spiritual health are crucial to the long-term struggle for reform. Francis has said on multiple occasions that he doesn’t expect to be around for a long time.  No one quite knows what to make of these statements, and he makes them with alarming frequency and informality. (The most recent statement came at the close of World Youth Day Krakow as Pope Francis addressed volunteers before departing for Rome.  When Panama City was announced as the next host city, Francis told the young people, “I don’t know whether I will be in Panama, but I can assure you that Peter will be!”) In light of this, a recent pronouncement of the new Vatican Dicastery for Promoting Integral Human Development is worth noting.  The new dicastery merges four existing pontifical councils: Justice and Peace, Cor Unum, Migrants and Travelers, and Health Care Ministry.  The current head of the council for Justice and Peace, Cardinal Peter Turkson, will lead the dicastery, but in a surprising move the Pope decided to head the sub-section dedicated to refugees and migrants himself "ad tempus"—for the time being.  (Perhaps it’s not that surprising since Francis has been a courageous voice on the world stage in defense of refugees for the past three and a half years.)  The restructuring will officially take effect January 1, 2017, and then the work of the dicastery begins.  The big takeaway here is that Francis seems to have every intention of sticking around for the time being, and that’s good news for believers in his reforming vision.  Let’s hope he remains in good health! Shifting gears, the Catholic and Orthodox churches celebrated a Day of Prayer for the Care of Creation on September 1.  Pope Francis declared last year that Catholics would officially join the Orthodox in this practice saying, “The annual World Day of prayer for the Care of Creation offers to individual believers and to the community a precious opportunity to renew our personal participation in this vocation as custodians of creation, raising to God our thanks for the marvellous works that He has entrusted to our care, invoking his help for the protection of creation and his mercy for the sins committed against the world in which we live.” (Letter announcing the “World Day of Prayer for the Care of Creation”). This year, Francis’ message for the day of prayer was titled: “Show Mercy to our Common Home.”  It was a remarkable statement, inspiring and challenging at the same time, including an immediate call to repentance and conversion for the injustices committed by human beings—including Christians—against the created world, all written in the typically unequivocal language of Francis. And it certainly caught the world’s attention.  One mainstream response came from the Guardian in the form of an online editorial.  The overtly concerned staff articulated what they see as the major roadblock to ecological sustainability on a global scale: “Trust and co-operation would lead to the best result for everyone, but each player or nation state will benefit more in the short term from a policy of selfishness and treachery.”  And then, in a philosophically illuminated manner, they insist that “Climate change is a global problem, and it can only be countered by some kind of global consciousness and a sense of the common good that embraces the whole of humanity.”  This is the same message they hear in the words of Pope Francis, who they say, “has devoted considerable effort and political capital to the attempt to construct a coherent theory that can show how damage to our environment also harms us, and not just our hypothetical descendants.  This really matters.” What’s particularly striking about this kind of response from a popular secular media outlet is their new-found comprehension and appreciation for key principles in the Catholic worldview.  The ecological crisis has led countless people to see what the folks at the Guardian see: that we need some kind of “global consciousness and a sense of the common good that embraces the whole of humanity.”  That’s what the Church has always said.  That’s what Francis says quite clearly, and it resonates with people who aren’t fluent in “church-speak.” The best example I can think of to describe this development is the address Pope Emeritus Benedict XVI gave at Westminster Hall in England in 2010.  Speaking to politicians, academics and business leaders, Benedict posed a critical question concerning the role of government in the 21st century: “Where is the ethical foundation for political choices to be found?”  He went on to describe the Catholic perspective on this question, and insisted that it is a unique and necessary perspective; one that should always be in dialogue with the broader civil society in order to protect human dignity and promote the common good.  In his own words:

“The Catholic tradition maintains that the objective norms governing right action are accessible to reason, prescinding from the content of revelation. According to this understanding, the role of religion in political debate is not so much to supply these norms, as if they could not be known by non-believers—still less to propose concrete political solutions, which would lie altogether outside the competence of religion—but rather to help purify and shed light upon the application of reason to the discovery of objective moral principles.”

Benedict also warned of the dangers of removing religion from the public square and political discourse: “The world of secular rationality and the world of religious belief need one another and should not be afraid to enter into a profound and ongoing dialogue, for the good of our civilization.” This was the kind of insightful and brilliantly argued address for which Benedict was beloved in academic and clerical circles.  But it had little influence or impact on common people or on the mainstream secular establishment.  That seems to have changed under Francis.  What Benedict argued in his Westminster address is precisely what the editors at the Guardian admitted: that in order to resolve the current ecological crisis, “We need the help of people who are clear about the distinction between humans and gods.” As scary as it is to ponder our current ecological predicament, it is encouraging to see a real and mutual understanding develop between the world of secular rationality and the world of religious belief.  The new language that Pope Francis uses to express the old principles of Catholic Social Teaching—on care for Creation for example—has built a bridge into the secular world that the Church has struggled to build in its recent past.  Building bridges has always been the goal of the Church, as Benedict’s address at Westminster demonstrates, but Francis is particularly good at it.  And the result is an emerging dialogue between people of fundamentally different beliefs; a dialogue that will have to grow stronger to save our planet. Read the Guardian editorial: "The Guardian view on Pope Francis: an unlikely voice for the environment" (Photo: CNS)