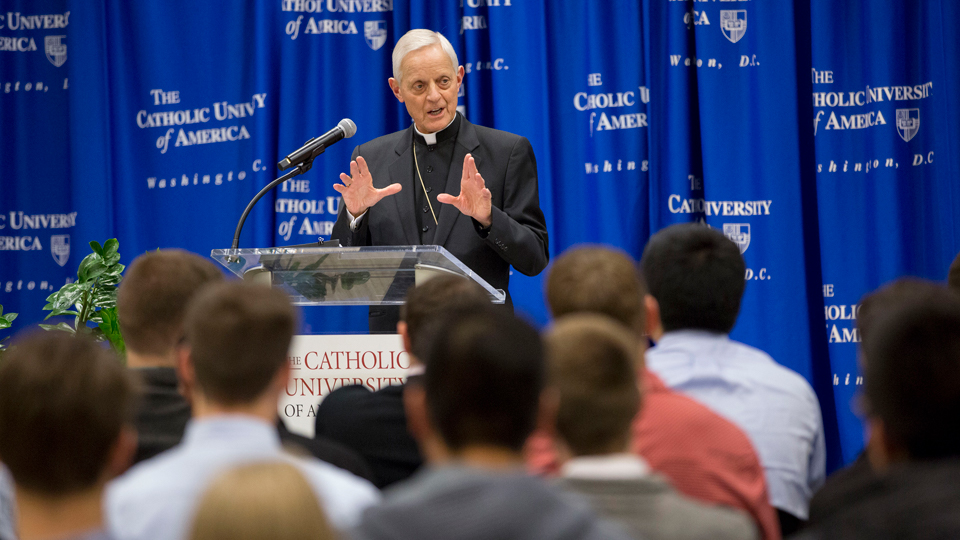 CNS photo/Jaclyn Lippelmann, Catholic Standard
Cardinal Wuerl Talks with College Students at The Catholic University of America and Reflects on the Challenges of Racism in Society Today
“Our Christian identity…calls us even more insistently to confront and overcome racism.”

WASHINGTON, D.C. – Cardinal Donald Wuerl, archbishop of Washington, spoke with students on Tuesday evening at The Catholic University of America and offered his reflections on the problem of racism in our culture and society. The context of Cardinal Wuerl’s talk was his November 2017 pastoral letter, The Challenge of Racism Today on the importance of dialogue in confronting racism. At that time, the cardinal said the pastoral letter was not intended to be the final word, but rather, what he hoped would be the start of robust dialogue that guides us toward reconciliation. The cardinal opened his remarks on Tuesday by urging the students to “envision our culture and our society and the way in which we are influenced as a community that derives so much of its cultural and even moral sustenance from a deep societal well.” That “well” is fed by many streams of ideas, such as media, education, religion, politics, business, and many other opinions and sources, Cardinal Wuerl said. “All of these streams flow into the common source from which we are influenced.” He continued, “The experience of humanity across the globe shows that the well of societal influence and formation has, to some extent, been tainted, depending on where and when you live, by a number of longstanding and too often subtle bigotries, prejudices, hostilities, forms of discrimination, separatism, and injustices.” 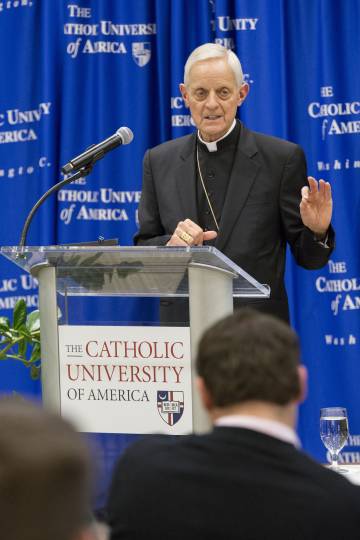 Because of this, Cardinal Wuerl said, it is difficult to avoid “getting at least a minor infection” from the unhealthy cultural contaminants. Cardinal Wuerl noted that, historically, the United States has particular contaminants: anti-Semitism, anti-Catholicism, and racism, among others. “We are all one species, one people, one human family, albeit manifested in diverse ethnic, cultural and societal ways,” he said. “Nonetheless, we are, all of us, brothers and sisters, children of the same one God.” The evil of racism, Cardinal Wuerl noted, is that it primarily “offends God by a denial of the goodness of creation. It is a sin against our neighbor, particularly when it is manifested in support of systemic social, economic and political structures of sin. It is also a sin against the unity of the Body of Christ by undermining that solidarity by personal sins of prejudice, discrimination and violence.” Fortunately, the cardinal noted, the awareness and attention given in the past two generations to the evils of racism “acts as a solvent in some of the streams flowing into our well of common consciousness.” The paths toward reconciliation include “raising awareness, education and opportunities for social interaction.” Cardinal Wuerl spoke of the blessing and dedication of the memorial markers intended to honor enslaved people who have been buried in cemeteries throughout the archdiocese as one small effort by the Archdiocese of Washington “to right a wrong and correct a failure – a serious and unjust failure.” “There is no denying the commission of the moral crime of slavery by some Catholics in our area, including some religious orders and clergy – despite the teachings of the popes condemning this evil practice – which is a cause of great shame to the Church today.” He continued, “It seems that over the decades and decades, not to say the centuries of this horror, our brothers and sisters in the faith who were enslaved and in human bondage, were treated with the same inequity at their burial. They received no public marker. While it is true that all of us are equal in our desire someday to reach God and that all of us are equal in death before God, it does not seem to be true that everyone received equal remembrance once they died and were buried.” The memorial markers will be installed in archdiocesan cemeteries this spring. The cardinal also spoke of the restructuring of pastoral ministry within the archdiocese as a way to bring greater awareness of cultural diversity and the rich blessing it is, citing the archdiocese’s Office of Cultural Diversity as an example of fostering simple recognition that we are one spiritual family made up of a diversity of heritages and backgrounds to be a true reflection of the face of God. Cardinal Wuerl concluded his talk by returning to the image of streams feeding the well of cultural thought. “Here on the campus of The Catholic University of America we have to take some pride in the fact that one of those underground streams is our Catholic faith…that includes recognizing all men and women as created in the image and likeness of God, as brothers and sisters of the same loving God,” the cardinal said. “The stronger the stream of faith conviction, truth, and moral fortitude is the cleaner the waters in the well become. The more clean water, the less the contaminants and the healthier the society that drinks from it.”