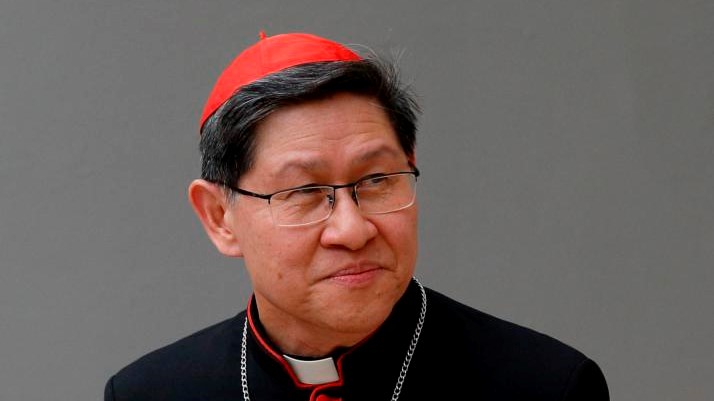 Cardinal Luis Antonio Tagle of Manila, Philippines, is pictured in Rome May 6, 2018. In a move that may signal Pope Francis' plan for the reform of the Roman Curia is close to completion, the Vatican announced Dec. 8, 2019, the pope has named Cardinal Tagle prefect of the Congregation for the Evangelization of Peoples. (CNS photo/Paul Haring)
We are delighted to hear that Luis Antonio G. Cardinal Tagle of the Archdiocese of Manila, friend of Salt + Light Media, has been appointed head of the Congregation for the Evangelization of Peoples by Pope Francis. Cardinal Tagle's show, The Word Exposed, airs on our network every Saturday at 5 pm ET. This hour-long program showcases Cardinal Tagle in his true form as preacher and homilist as he shares his reflections and insights on the Sunday scriptures in a manner that is very down-to-earth, crystal clear, awe-inspiring, and yet very simple to understand and appreciate.  He has also appeared several times as a guest on Salt + Light Media's original programming. Check out these exclusive interviews with the new prefect of the Congregation for the Evangelization of Peoples. In June 2012, just four months before the announcement that Pope Benedict XVI had selected the Archbishop of Manila as one of his new cardinals, Archbishop Tagle spoke with Fr. Thomas Rosica, CSB, about his leadership role in the Church and Filipino saint Pedro Calungsod.   Having been made a cardinal in November 2012, Cardinal Tagle participated in the conclave which elected Jorge Mario Bergoglio, Archbishop of Buenos Aires, to succeed Pope Benedict XVI in 2013. Outside the conclave, Vatican expert John Allen Jr. revealed to Sebastian Gomes the qualities that might have made this "superstar of the Catholic Church in Asia" a possible candidate for the new Bishop of Rome.   During the 2014 Extraordinary Synod of Bishops on the Pastoral Challenges to the Family, Cardinal Tagle offered his perspective as one of the three President Delegates of the Synod.   He also shared with us his thoughts on the invaluable contributions of Paul VI to the development of collegiality in the modern Catholic Church. The beatification of Pope Paul VI (now St. Paul VI) took place during the 2014 Synod.   In October 2017, Cardinal Tagle sat down once again with Fr. Thomas Rosica, CSB, this time at the Pontifical Gregorian University in Rome.   We wish the new prefect well with all our hearts. As we prepare this Advent season for the coming of the Word of God among us, let us pray for Cardinal Tagle and his new responsibility of continuing the Church's mission of bringing the good news of the Gospel to the world.