The Canadian Church will celebrate Canada day a little more than usual this year. 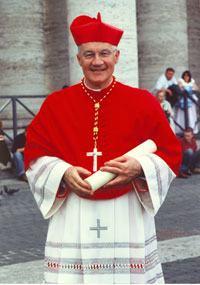 It was announced this morning that the Archbishop of Quebec, Cardinal Marc Ouellet, will be packing his bags for the Vatican. Pope Benedict has appointed Cardinal Ouellet as the new Prefect of the Congregation for Bishops and President of the Commission for Latin America. This is the first such appointment for a Canadian bishop.The Congregation for Bishops oversees the selection and approval process for new bishops. They also schedule the papal audiences required for bishops and arrange the creation of new dioceses. In a press conference this afternoon, Cardinal Ouellet said he is honoured and humbled by the appointment. The Cardinal says that although he will be leaving a land he loves dearly, he will remain in close communion with the people of Quebec and of Canada. In his congratulatory letter to the Cardinal, Bishop Pierre Morissette, the president of the Canadian Conference of Catholic bishops writes that his appointment is a tremendous honour not only for him but also for the Church in Canada. Cardinal Ouellet will assume the role of apostolic administrator of the Archdiocese of Quebec until he takes possession of his office in Rome. Read more about Cardinal Ouellet's appointment on the Archdiocese of Quebec's website HERE.