As we reported on Perspectives and throughout the blog, Cardinal William Levada, the Prefect of the Congregation for the Doctrine of the Faith, was visiting Ottawa and Kingston, Ontario earlier this week.  His celebration of Mass at Ottawa's Notre Dame Cathedral Basilica will be broadcast on Salt + Light tonight, March 11th, at 8:30pm ET/9:30pm PT, with an encore presentation Friday, March 12th at 1pm ET/10 am PT. Cardinal Levada will also be featured on Witness, hosted by Fr. Thomas Rosica CSB, on Sunday, March 28th at 8pm ET.  The full text of Cardinal Levada's homily on Monday can be found below: 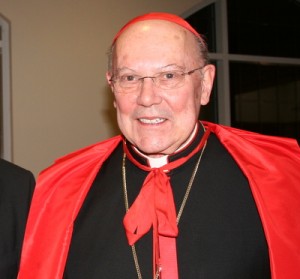