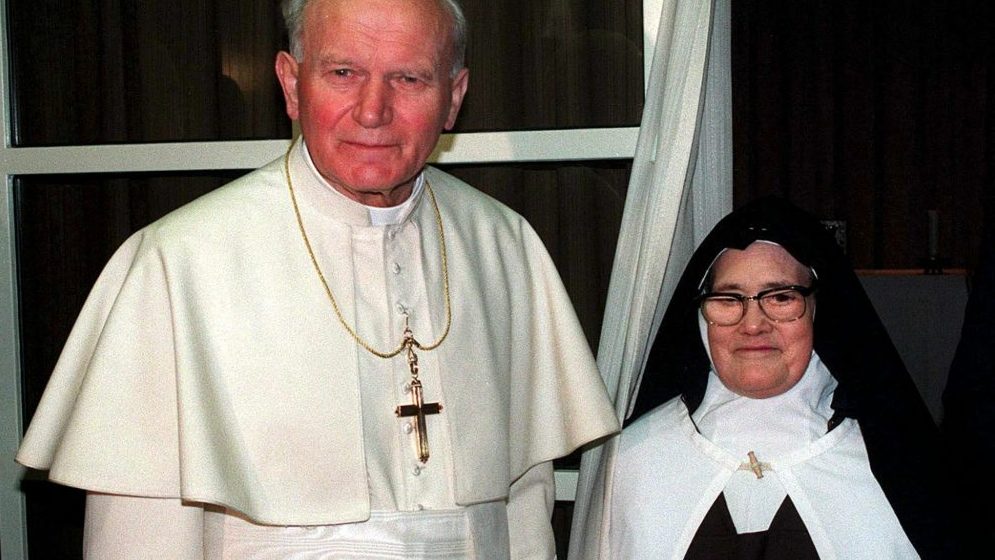 Under Pope John Paul II, Cardinal Tarcision Bertone served as Secretary of the Congregation for the Doctrine of the Faith, when Cardinal Ratzinger (later Pope Benedict XVI) was Prefect. He was made a cardinal in 2003 and served as Secretary of State for the Vatican from 2006 to 2013. As Secretary of State, Cardinal Bertone was responsible for the political and diplomatic affairs of the Holy See. In 2012, Fr. Thomas Rosica, CSB spoke with him for the Salt + Light TV program Witness. As part of the conversation, they spoke about Fatima:

Rosica: You said one of the roles (of the Congregation for the Doctrine of the Faith) is to protect the faith of the simple. When you were in the congregation you had to oversee the questions surrounding Fatima, and you are an expert in Fatima. It's an aspect of the Church important for everyone. Can you explain your role in the revelation of the secrets of Fatima and your relationship with Sr. Lucia? Bertone: We all know well that in the tradition of the Church there was a public revelation in the Sacred Scriptures, concluded with the death of the last apostle and there are private revelations, like specific revelations made by God, Our Lady, and the Saints, that accompany us. Experience has shown that these revelations inspire devotions, forms of prayers and spirituality. It is important that they nourish and lead towards the great tree of the Liturgy of the Church and the tradition of the Church at prayer. The apparitions at Fatima, recognized by the Church like other apparitions that have occurred in history, offer the whole church at that specific point in time, 1917, a crucial time of changes in the history of humanity, a moment of anti-Christian, anti-Catholic violence. Fatima offers beautiful messages that are typical of the Gospel: a call to conversion, a call to penance, a call for a conversion of heart to Christ and a call to prayer. As we know Our Lady appeared to three shepherd children and entrusted to them the messages, and some secrets later to Lucia. We know that Jacinta and Francisco died young. Our Lady confided to Lucia messages to give to the authorities of the Church and to humanity. Our Lady entrusted particularly to Lucia a secret that is that third part of the secrets of Fatima. R. - Why do you think the secrets of Fatima continue to fascinate people today? They are not simply something of the past because people are still talking about and showing interest in the secrets of Fatima. B. - As Cardinal Ratzinger explained in his commentary on the authentic text published in 2000, the secret of Fatima is a secret that reinterprets the dramatic history of the 20th century, the story of the martyrdom of the Church of the 20th century – a martyrdom that touched even the Pope in that terrible assassination attempt that brought him to death's door on May 13, 1981. The coincidence of the date is significant. But it's a secret, and a message, that still accompanies the life of the Church because the Church is constantly called to conversion, to repentance, to remove the punishments of God - I say this figuratively- towards the unfaithful communities, even the believing communities who rebel against God's plan. Unfortunately the temptation to refuse God, and we have seen this tendency in Europe which doesn't want to recognize it's Christian roots, is a tendency we see in other parts of the world. Thus there is still an ongoing need for prayer, intercession, penance, so that that God may forgive; that a merciful God may ransom this precarious humanity. I was commissioned to meet Sr. Lucia by the Holy Father John Paul II and the then-prefect of the Congregation for the Doctrine of the Faith, Cardinal Ratzinger. I met her many times and asked her exactly about the third part of the secret of Fatima in order to compare this interpretation with the interpretations of the Pope and the church hierarchy. I also asked her about her very lucid memories of the apparitions at Fatima. R. - What message can you give to those who say the secret has not been fully revealed, that there is something still being kept secret? B. - Unfortunately these people are those who see Our Lady's messages in an apocalyptic, fatalistic, way – I'd say mathematically and materialistically. Because if the threat does not materialize, and if the Pope doesn't die, and 500 bishops, 500 priests and 500,000 faithful don't die, then the message wasn't true! This view is a Hebrew apocalyptic view, which has been replaced by a Christian apocalyptic view – a vision that is faithful to and gives credit to the Lord's merciful will which passes through that which the Madonna requested: prayer, penance of the good, of the servants of God, of witnesses of God's love. - Pope John Paul II is pictured with Carmelite Sister Lucia dos Santos, the last of the three Fatima visionaries alive in 1991. (CNS photo/Joao Paul Trindade via EPA) Watch the full interview: