Yesterday in Rome Salt + Light was awarded the "Capax Dei" Prize at the Mirabile Dictu International Catholic Film Festival, organized annually by the Vatican's Pontifical Council for Culture. The award was presented for Salt + Light's documentary "In Her Footsteps: the Story of Kateri Tekakwitha," which premiered in Rome last October. The following story appeared this morning on Vatican Radio:

The 4th edition of the Mirabile dictu (Wonderful to relate) International Catholic Film Festival took place this week at the Vatican Auditorium here in Rome. The 2013 Festival was dedicated to Kateri Tekakwitha, the first Native American saint, canonized by Benedict XVI last fall. On the occasion of the final evening of the event, the prestigious “Capax Dei” prize was awarded to the film “In Her Footsteps: the Story of Kateri Tekakwitha” produced by Canada's Salt and Light TV. 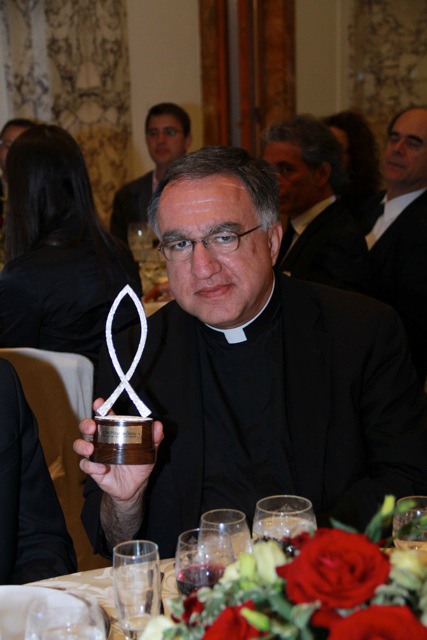 “We were very surprised to hear that we received the Capax Dei prize,” said Father Thomas Rosica, C.S.B., the Founder and Chief Executive Officer of Salt and Light TV. “The film is one of our best films. We’ve done 45 or 47 documentaries in the past 10 years. The Kateri one is the most recent one . . . it’s quite extraordinary.” He spoke about the world’s first canonised Native American Saint: “Kateri is an extraordinary figure. It’s a saint of the sixteenth century, that we were able to open up her story 400 years later. She’s a bridge with the native people, she’s a great instrument of reconciliation. She’s a model of chastity, of purity for young people, a bold model of courage. A model of holiness, a young lay woman. Many, many people have responded beautifully to her story.” Father Rosica spoke about the significance of Saint Kateri today. “The meaning is holiness. Holiness has no dateline, it’s not limited to a particular moment in time.” He described her as an “instrument of the New Evangelization.” “Though the story is old,” he said, “the story is ever new, because it’s a story of holiness which never grows old.”