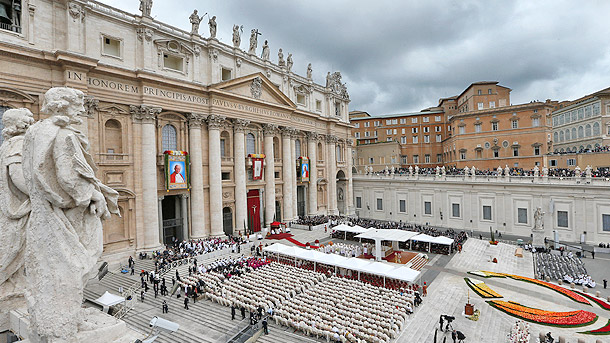 The Canadian Conference of Catholic Bishops joins the Church throughout the world and all people of goodwill in celebrating the canonizations of Saint John XXIII and Saint John Paul II.
The two are wonderful models of holiness. By their canonizations today, they have been recognized as timeless witnesses to the Christian faith. They are examples not only for Catholics but for all humanity – through their radical identification with Christ, their intense life of prayer, their personal dedication to their vocation, the self-sacrificing love they manifested in their ministry, their deep pastoral love for everyone. Both Popes, moreover, were tremendous leaders of the community of faith, reshaping and transforming the Catholic Church and even all Christianity, while also influencing modern world history.
Pope John XXIII explained his decision to convoke the Second Vatican Council with the following words: "In the face of this twofold spectacle – a world which displays a serious state of spiritual poverty and the Church of Christ, still so vibrant with vitality – we ... felt at once the urgent duty to call our children together in order to give the Church the possibility to contribute more effectively to the solutions of the problems of the modern age" (Apostolic Constitution Humanae Salutis, 25 December 1961). Forty years later, as the third millennium began, Pope John Paul II encouraged the Church to "go out into the deep" as the Lord has taught (Luke 5.6): "These words ring out for us today, and they invite us to remember the past with gratitude, to live the present with enthusiasm, and to look forward to the future with confidence" (Apostolic Letter Novo Millennio Ineunte, 6 January 2001).
Both Popes had experienced the horrors of war and totalitarianism, but each remained confident new opportunities were emerging to rebuild the world and reconstruct society. Both encouraged social engagement for justice and peace. Both identified urgent moral concerns. John XXIII reminded the world of its need for the Church as "an authoritative voice, the interpreter and champion of the moral order, the defender of the rights and duties of all human beings and of all political communities" (Humanae Salutis). John Paul II prevailed on Church and society to give "due attention to solidarity and the respect owed to every human person", and to bring Christ's "light to bear on a culture which, in an ever more disturbing way, is in danger of losing sight of the very meaning of marriage and the family as an institution" (Novo Millennio Ineunte).
Both Popes called for the renewal of the Church in its loving service to the world, with each appreciating the importance of doctrinal clarity and mutual charity. Each inspired new efforts toward Christian unity and interreligious dialogue. Each recognized the importance of the Second Vatican Council in order to refocus the Church on its mission and revitalize its members. Each of these great Popes witnessed to faith in the heavenly Father, inspired hope in the Holy Spirit, and showed selfless charity in following in the footsteps of Christ.
God calls humanity to holiness, and each person to sainthood. John XXIII and John Paul II have been recognized today as examples and models for all people. Celebrated as saints in the Kingdom of God, they continue to intercede for us before the Lord, inspiring each of us in our personal call to be holy as God is holy, and to serve as Jesus showed us how to serve.
Echoing my earlier words when welcoming the news that Pope Francis would canonize our two new saints, let us all give thanks to Almighty God for the gift of these two great luminaries. Saint John XXIII and Saint John Paul II, each in his own unique way, provided wisdom in times of darkness. Through their faithfulness to Christ, they encouraged joy and hope. Let us too follow their example and be witnesses of the Gospel to our world.
+ Paul-André Durocher
Archbishop of Gatineau and
President of the Canadian Conference of Catholic Bishops
Divine Mercy Sunday, April 27, 2014