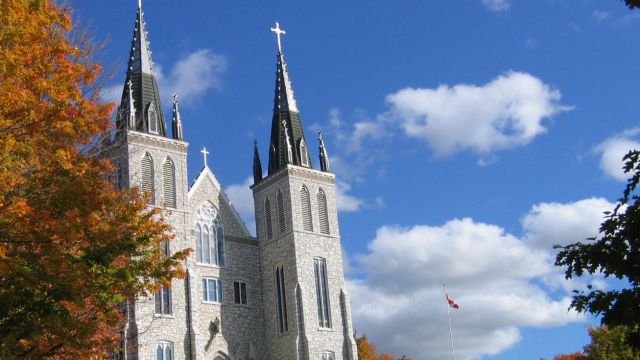 “There is something holy about this place, something special. Here we stand on holy ground sanctified by the blood of the martyrs. Here we pray in solidarity with them. These are our Jesuit brothers who gave their lives: willingly, freely – and in love,” says Fr. Steve Leblanc, SJ – Jesuit priest at Martyrs’ Shrine
The history of the Canadian Martyrs has been so rightly told, and retold many times. We know of their faith, their courage, and their horrific martyrdoms. On September 26, I will find myself in the company of Jesuits and pilgrims from all over Canada, and the U.S., who will gather in Midland, Ontario, to celebrate the  annual Feast of the Canadian Jesuit Martyrs. In terms of pilgrimage sites, Martyrs Shrine is a hidden gem with acres of beautiful land, a simple and humble shrine church that welcomes over 100,000 pilgrims and visitors every year, an impressive reconstructed Huron village, and the site where is it believed that Jean de Brébeuf, Gabriel Lalement, and many Huron-Wendat people were tortured and martyred.
These eight men have become part of my own journey, and so I feel that they are indeed my brothers even though two years ago, I would have laughed at the idea of becoming a Jesuit.  At that time,  in my eyes, the Jesuits were flamboyant, irreverent, tree hugging social justice do-gooders.  Now, after having spent a year in the Jesuit novitiate I have a fuller understanding of what makes these men tick.
If we look at Jesuit history, from the very beginning St. Ignatius and his companions were looked upon as somewhat odd. They wandered about in ragged clothes, with no clear course of direction, begging, and preaching.  Some were imprisoned, brought before the court of inquisition, and questioned about their motives and what they were trying to accomplish.  They weren’t a group of men building a new religious order on a foundation of something that made sense to people – instead it was built on something new, something different, something that made people feel mildly uncomfortable. 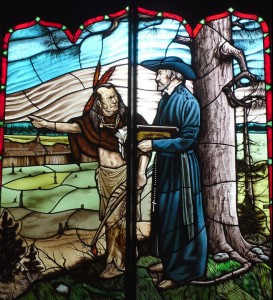 In 1540, the Society of Jesus was approved by Pope Paul III, and these men, the first Jesuits, were still viewed with caution. Who were these men that had the ear of kings and queens? Who were these men who seemed to be everywhere, at all times, in the middle of everything? The Society was later suppressed.
Post suppression, and leading into the late 20th century, widespread attitudes toward the Jesuits were no different. As the Jesuits began to discern their mission anew, a call for deeper sensitivities around issues of social justice emerged, and Jesuits embraced a new path wholeheartedly. Who were these characters being arrested, protesting, and even losing their lives in many parts of the world?
I have had the privilege of being in love at different times in my life. Being in love is fun, exciting, and can even make you become somewhat foolish. Being in love causes you do things that you wouldn’t normally do, and fills you with a fire that burns bright. You become a fool. A fool that is in love. Just so, St. Ignatius was in love. His companions were in love. Jean de Brébeuf was in love. Sts. René Goupil, Isaac Jogues, Jean de Lalande, Antoine Daniel, Noel Chabanel, Charles Garnier, and Gabriel Lalemant were all men who happened to be in love.
Just over a year ago, I joined the Jesuits. Yes, we can be flamboyant, we are sometimes misunderstood as being mildly irreverent, and we are indeed tree hugging social justice do-gooders. We are men in love. We are in love with our sense of mission, and dedication to loving others even if it makes people feel mildly uncomfortable. We belong to something great, something profound, and something alive.
Canada’s national shrine of the Canadian Jesuit Martyrs will celebrate its 90th anniversary of the opening of the present church on the hill in 2016. It is Canada’s only national shrine outside of Quebec. The only other national shrine is St. Joseph’s Oratory which is approximately of the same age as Martyrs’ Shrine and is located in Montreal, Quebec.
Please visit: http://martyrs-shrine.com/