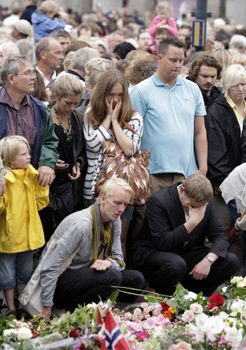 On Sunday, Pope Benedict XVI responded to the terror attacks in Norway that killed 76. In his message after praying the Angelus, he reiterated his "heartfelt appeal to abandon forever the ways of violence and to shun the logic of evil". Bishop Pierre Morissette, president of the Canadian episcopal conference, released the following statement today, echoing the Pope's sentiments:

On behalf of all my brother Bishops of Canada, I wish to extend a most sincere message of sympathy to and of solidarity with the Norwegian people who are actually confronting a terrible tragedy in their country. Rest assured that all the Catholic Bishops of Canada are united with them in prayer, especially for families who have lost of one of their own. This message of sympathy is also addressed to the Norwegian Royal Family, the Government and the civil authorities who must deal with the repercussions of this tragedy. The Bishops of Canada markedly share the values of peace and of solidarity of Norway. These values must take precedence over these trying times currently facing your country.