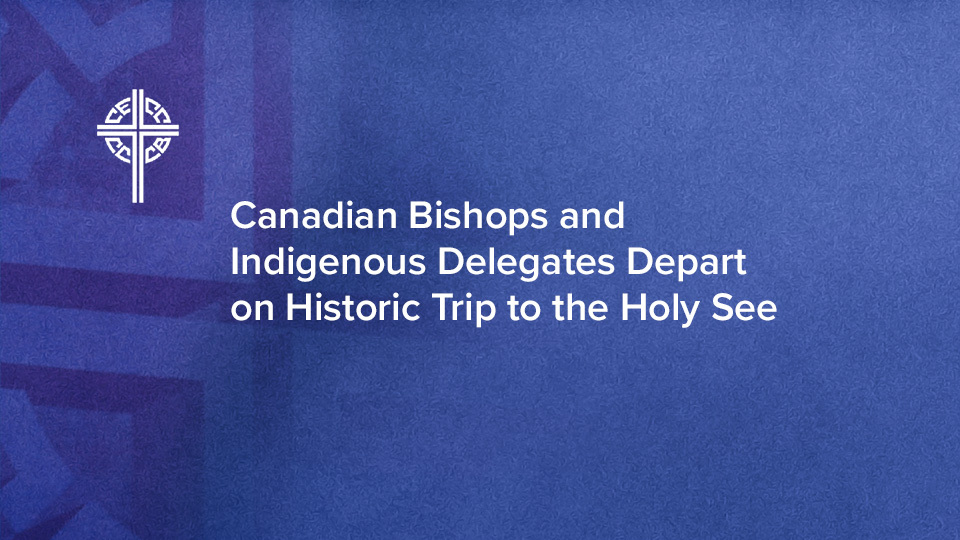 The following statement was released by the Canadian Conference of Catholic Bishops (CCCB) on March 24, 2022. The text is also available on the CCCB website.

This weekend, a delegation of 32 Indigenous Elders, knowledge keepers, residential school survivors, and youth will journey together from across the country to meet with Pope Francis. These delegates, who were selected in collaboration with the Assembly of First Nations (AFN), the Métis National Council (MNC), and the Inuit Tapiriit Kanatami (ITK), bring a depth of lived experience and insight on the legacy of residential schools and the impacts of colonialism, with many directly engaged in the ongoing journey of healing and reconciliation. Delegate names have been published by the AFN and the MNC respectively. The ITK, after consulting with delegates, has opted not to publish a full list of names, although representatives will participate in a media briefing on March 28th. “As Canadian Bishops, we are grateful to these delegates for walking with us on this journey and to Pope Francis for his attention to their suffering and his deeply-held commitment to social justice,” said CCCB President, the Most Rev. Raymond Poisson. “We expect that these private encounters will allow the Holy Father to meaningfully address both the ongoing trauma and legacy of suffering faced by Indigenous Peoples to this day, as well as the role of the Catholic Church in the residential school system, which contributed to the suppression of Indigenous languages, culture and spirituality.” Individual meetings and relating media briefings will each include representatives from the relevant Indigenous delegation and the CCCB. The schedule can be summarized as follows: The Indigenous delegations will be accompanied on the journey to Rome by the following Bishops who have led the CCCB’s planning efforts to date: The Most Rev. Anthony Krótki, Bishop of Churchill-Hudson Bay, will also accompany the Inuit delegates to Rome. The delegation will conclude with a final audience with Pope Francis on April 1st at 12 p.m., whereby the official delegates will be joined by a larger group of Indigenous Peoples from across the country. The audience will provide an opportunity for the Holy Father to publicly respond after listening intently to delegates throughout the week. A media briefing will follow at 3:30 p.m. The final audience, in addition to all press briefings, will be live streamed and a pool feed will be available to accredited media. *All times in Central European Standard Time. Additional details available upon request.   About the Canadian Conference of Catholic Bishops The Canadian Conference of Catholic Bishops (CCCB) is the national assembly of the Bishops of Canada. It was founded in 1943 and officially recognized by the Holy See in 1948. For further information, email communications@cccb.ca.