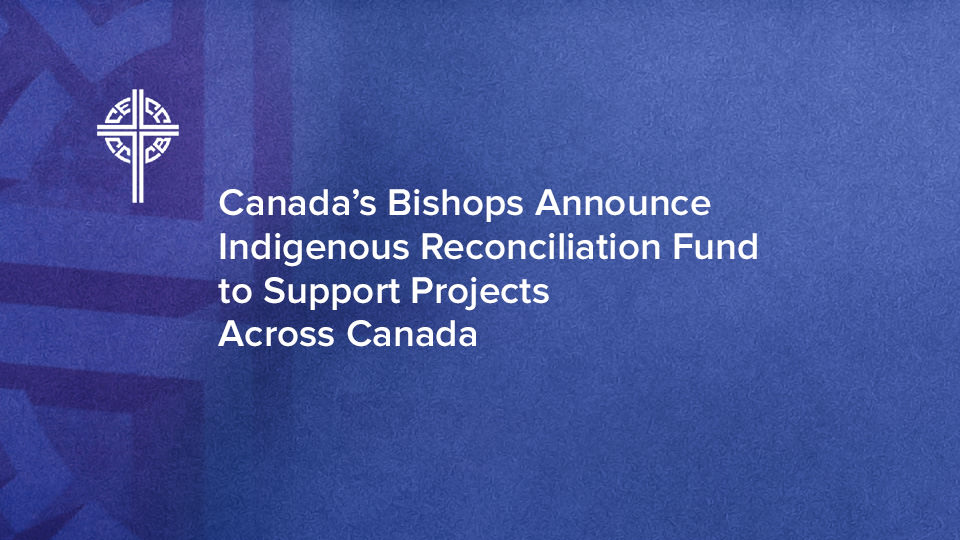 The following statement was released by the Canadian Conference of Catholic Bishops (CCCB) on January 28, 2022. It gives further details regarding the pledge made in September 2021 to raise $30 million to support healing and reconciliation initiatives across Canada. The text is also available on the CCCB website.

Canada’s Catholic Bishops have agreed to establish a new registered charity to support and advance healing and reconciliation initiatives. The charity is expected to manage the Indigenous Reconciliation Fund, which will accept contributions from 73 dioceses across Canada in order to fulfill the $30 million financial commitment made by Canada’s Bishops in September. “The Bishops of Canada are fully committed to addressing the historical and ongoing trauma caused by the residential school system,” said Bishop Raymond Poisson, President of the Canadian Conference of Catholic Bishops (CCCB). “In moving forward with our collective financial commitment, we will continue to be guided by the experience and wisdom of Indigenous peoples across the country”. The Indigenous Reconciliation Fund will be managed with financial measures in place to ensure transparency and good governance. Board directors and members of the corporation will collectively bring a strong financial acumen and deep commitment to the healing and reconciliation journey. The directors of the Board include: The members of the corporation include: The fund will publish annual reports and will be subject to an audit by an independent accounting firm each year. Any administrative costs will be on top of the $30 million being raised and will not be deducted from this principal amount. While specific disbursement guidelines will be informed by additional input from Indigenous partners, we intend the funds to contribute to the following priorities: Regional and/or Diocesan Granting Committees will be established to identify projects that further the fund’s priorities, review applications and request funds to support such projects. These committees will include Indigenous and Catholic membership and it is our recommendation that they be chaired by local Indigenous partners We recognize that there has been considerable disappointment with a previous Catholic fundraising campaign tied to the Indian Residential School Settlement Agreement. While the CCCB was not party to the agreement, we have recognized the shortcomings of this campaign and learned critically important lessons to ensure that the Indigenous Reconciliation Fund is fully funded and well managed with appropriate oversight. Additional information on the “best efforts” campaign led by the Catholic Entities Party to the Indian Residential School Settlement can be found here. The establishment of this national framework builds on existing fundraising from local Catholic entities including the Archdioceses of Winnipeg and St. Boniface, the Bishops of Saskatchewan, and the Archdiocese of Vancouver. The CCCB will continue to provide regular public updates on this work as part of the ongoing journey towards healing and reconciliation.