Last Saturday night, in Calgary, Catholic artists from across North America gathered for the 10th annual United Catholic Music and Video Awards and Conference, under the theme “Called to Serve”. 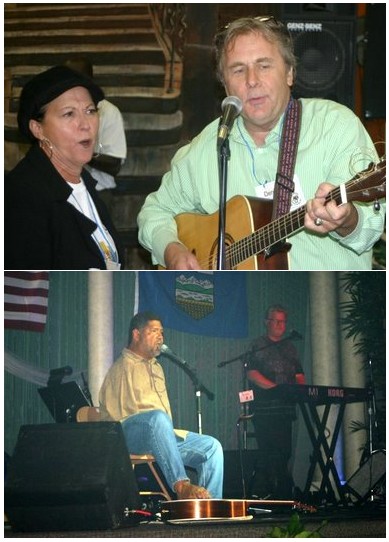 The UCMVA was founded with the aim of bringing together Catholic presenters from around the world who celebrate their faith through various forms of media, including music, art, radio and television.
This year it’s the first time that the event took place outside of the United States and the first time that the event included a conference. Anyone can be a member of the UCMVA and their membership is increasing yearly. There is excitement among the Catholic industry that finally our Catholic presenters have a unity that gives them hope and encouragement in the ministry work that the Lord has called them to do.
The Awards are not so much of an “awards” ceremony that encourages competition or jealousy. The goal is to celebrate the achievements and to encourage a higher standard of work. There are no winners, but “recepients” and they are not the ones who are “better,” but rather the ones whom their peers judge to have been the most effective in their goals in a particular category that year.
And so, Saturday night we gathered to celebrate our gifts and to recognize the wonderful work that many are doing. The ceremony included performances of every single musical style, from Gospel to Classical, from Praise and Worship to Heavy Rock, from Rap to Country. Performances included Ceili Rain, Jerry Aull, Critical Mass, Denis Grady and the Stone Rejected Band, Tom Booth, MashetiMoses, Chris Bray and Tony Melendez. It was an inspipred evening.
There were many Canadian (and S+L friends) nominated in many categories and congratulations to our Canadian recipients: David of Catholic Bridge for Music Video/DVD of the Year, Love is the Only Choice, and Chris Bray for New Artist of the Year-2010 and Praise and Worship Album of the Year, for The Worship Album.
Visit the photo section on our Facebook page for more pics from the Awards show.