But I Don’t Speak Cantonese! Part 2 of 2 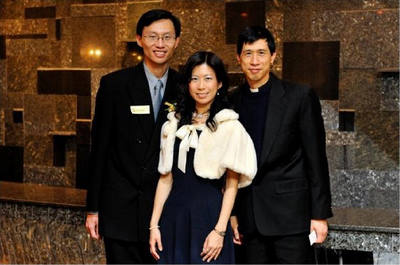 So last time, I had my chat with Donna Yiu about her involvement with the Chinese Catholic programming team at Salt + Light for the series Fountain of Love and Life.I mentioned to Donna that one of my highlights of the fundraising gala they organized on November 23rd was the feature story. At every gala, they’ve been showing a story that would appear in the series they are working on. This year, the story of the generosity of a married couple from Boston, Anita and Francis Sung, really enticed me to want to know more and to support their work of evangelization. I know it got me hooked!Paul Yeung and his wife Bonny are on the core team of Fountain of Love and Life.Mary Rose: Why was this a great story to tell?Paul: This feature story is all about a couple's willingness to give up their own interests to follow God's will. They sacrifice their own needs to fulfill others' needs. And they take advantage of every opportunity that God grants them. They never try to see what is in store for them before taking up each cross....they never let go of each opportunity to serve God and others. Oftentimes those opportunities require them to step out of their comfort zone to serve in an unfamiliar territory. They even open up their own precious home to accommodate strangers, each for an unknown period of time, even though it involved a lot of risks...and they have already 4 kids of their own. In short, they try to love until it hurts.Mary Rose: How did you find this feature story?Paul: One of the production team members, Joseph, used to work in Boston and it's where he met the Sung family (Anita & Francis). Joseph was also part of the Cell group that Anita and Francis started (dinner and meeting every Friday) and so he experienced the generosity, hospitality, and great faith of this couple first hand. Joseph started mentioning this couple to our team 1 1/2 to 2 years ago expressing his great interest to do an episode on this couple. However, because of the long distance and the lack of funding and human resources, we could not commit to this despite our strong wish to meet up with this couple and do an episode on them. It's God's planning that this summer Anita and Francis came to Toronto and Joseph arranged a lunch meeting so that Bonny and I could meet them personally. That was July 12. The short meeting convinced us 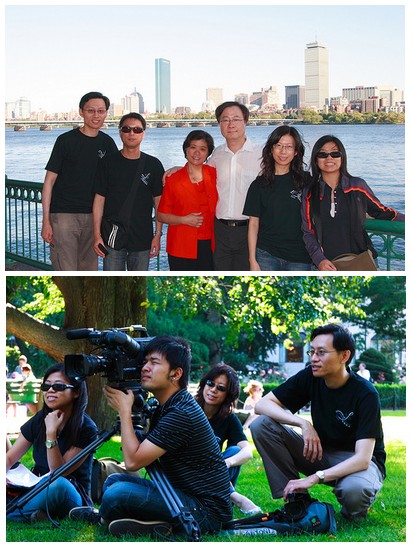 that we should seriously consider taking this bold step to see if it's feasible to do this feature on them. Coincidentally, we know a very good priest friend from Hong Kong who would be coming to Boston to do an Evangelization concert and we wished to join their concert...We then planned a trip to attend the Evangelization concert and at the same time visit the Sung family during the Civic Holiday long weekend. Anita and Francis welcomed our group of six people into their family....and their children allowed us to take ownership of their rooms and they all "moved" to the basement for the days we were there. Their hospitality during that weekend blew us away! During that weekend, we talked to them a lot to get as much info in order to plan for the filming. The filming was done during the Labour Day long weekend.Mary Rose: How did you work together as a team to get this story done? 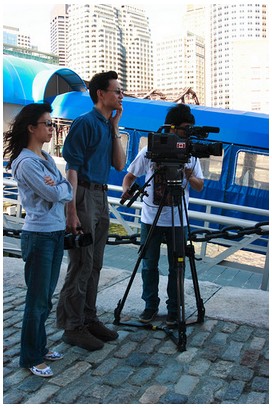 Bonny: Our team included Vivien Yip, Rosa Tse, Daniel Lui, Paul and me. We sat down and thought about all the potential storylines and decided that we should focus on their generosity and their willingness to accept God's invitation to open up their homes to serve His people. We came up with a preliminary script and interview questions. On the Labour Day long weekend, our crew and the cameraman, Eugene Lo, went to Boston for the filming. We spent all of Saturday and Sunday filming the interviews and capturing footage. We literally filmed all day, starting right after breakfast until late at night. They also arranged to have all the members of their Bible sharing group to come to their home for their typical big, home-made dinner for over 20 people, which was followed by a Bible sharing session. All the children of the Sung family even played musical instruments together to accompany the group's praise and worship. We also went to Mass with them on Sunday and did some filming outdoors. On Monday morning, we went around Boston to film the landmarks and city scenes.Mary Rose: I loved it that the Sung family and their friend Sam were present at the Gala – what a wonderful surprise! I couldn't really understand what the "talk show" onstage was about, though, since I don’t speak Cantonese! What came out of that conversation between the host and the three guests? 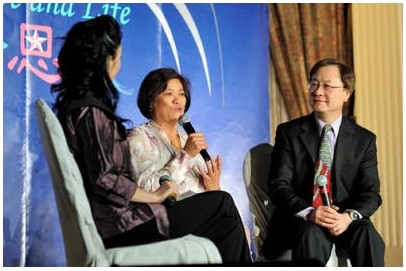 Bonny: The "talk show" part was a casual chat about several things covered in the story. The key message was that Anita and Francis never dreamed that their humble and "insignificant" work over the years would have drawn so much attention that someone would want to do a TV feature story on them. They were very glad that they could be tools of God to help spread His message to everyone. They also encouraged more people to open their homes to serve those in need. Sam said that the most important things he learned from Anita and Francis were cooking and how to be a loving husband (even though he's still single!) He saw Anita and Francis as his models for a good marriage.Mary Rose: What did you love most about this story and putting it together?Bonny: This is definitely one of the most memorable filming experiences for our team because we’ve never spent time “living” with the people we were interviewing before! It was a real privilege to experience their hospitality and generosity first-hand. We were all deeply touched by how they sacrificed their time, convenience, privacy, as well as financial resources, to make our filming weekend go really well. They went out of their way to make us feel at home, including sparing two bedrooms for our crew in a home that already has eight family members! The filming part was very enjoyable, but the post-production process was really lengthy, tedious and challenging. The sheer volume of tapes that we had to go through was a nightmare in itself. However with the guidance of the Holy Spirit and a dedicated team, we were able to overcome all the difficulties and come up with the final product in time for the gala. It was most rewarding to hear the feedback from many guests at the gala how much they were touched by the story and how they were inspired to do a little more to serve God and others.Mary Rose: Thanks so much for all your work and the sacrifices of your team, and for taking time to do this interview. God bless!To contact Fountain of Love and Life, send an e-mail to chinese@saltandlighttv.org. You can also check their webpage HERE for program information -- programs that also feature English subtitles.