But I Don’t Speak Cantonese! Part 1 of 2 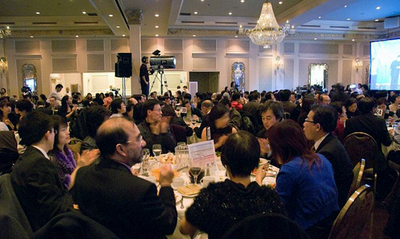 I don’t know how aware you are that Salt + Light has a deeply committed, resourceful, hopeful, inspiring Chinese Catholic programming team, but yes, we have one!Fountain of Love and Life, the first Chinese Catholic program produced in Canada, launched on Salt + Light Television in 2006. Now, they’re airing their third series, and are in production on their fourth. But what’s even more impressive is that this program is put together and funded through the blood and sweat of volunteers who have their own day jobs. And we’re talking about 100 volunteers (for all departments including production and marketing), six members of the core team, of whom a married couple acts as the main coordinators, and two paid employees who work part-time in our Salt + Light office.I’ve attended all the previous galas they’ve had, and each year, they keep getting better! The hosts are all wonderful and dynamic, the feature stories are always touching, and the live auction is always, well…LOUD! On November 23rd, I attended the third gala they’ve organized. Since I don’t speak Cantonese, I don’t know Chinese, I missed the bulk of the evening, but not the atmosphere! (I should note though that production-wise, there are English subtitles for all the TV programs) And this evening was made possible through the efforts of the main coordinator, Donna Yiu. Donna and I actually go way back to high school. We were both on the math team, and I always saw her as the smart math and business-minded student in school. 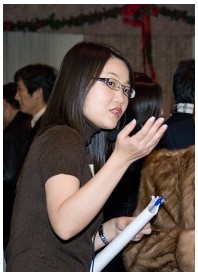 I’ll let you in on my tête-à-tête with Donna.Mary Rose: How did you get involved with Fountain of Love and Life?Donna: A couple of years ago, Fr. Tom and Paul Yeung got together. At that time, Fr. Tom invited Paul to produce a 13-episode Chinese program about the Chinese Catholic community. And Paul approached me and a couple of others who formed the Chinese programming ministry. That’s how we started in January of 2005. We started planning the first series. And that’s when I started getting involved.I was involved with the production of the first series. I took care of the financial side of the ministry and with the gala coordination, although I’m a chartered accountant by trade. The first year we had the gala, in 2005, there were only 400 people. For the gala this year, we had 668 seats. But including the crew who did not buy tickets, it comes to about 750 people for the whole night. We originally budgeted to raise $84,000. We were so happy to get over $100,000 from one night!Mary Rose: What will this $100,000 go to?Donna: As you know, we’re financially independent from Salt + Light. We’re doing everything ourselves, so we need more people working full-time on the production of our programs, not just volunteers. We need to be able to pay them. Also, we announced at dinner that Fairchild TV is going to air our episodes! We will need to pay for the airing of our episodes.Mary Rose: What is the significance of Fairchild TV for you?Donna: Fairchild TV is a 24/7 Chinese television program that airs in Cantonese and Mandarin. Pretty much everyone watches this station in the Chinese community. They have Hong Kong news and programs. It’s a television station for Chinese communities across Canada. So ever since the Chinese Catholic programming started, they’ve been very eager to air our episodes. Finally, we got the blessing from Fr. Tom and were able to secure a favourable timeslot on the station. And when Paul announced this at the Chinese gala during his speech, there was a big applause.Mary Rose: You know what, Donna, I didn’t know that you were so involved in your faith when we were in high school together.Donna: I became a Catholic before I emigrated to Canada. Every year, there’s an Eastern Canada Chinese Catholic Living Camp, which takes place on the Labour Day weekend. It’s a gathering and retreat for young people from the ages of 17-35. But we call it a living camp, because it’s not a quiet retreat but a living out of the faith. After I came to Canada, I started attending that and became more involved in Church and everything. But it was more at the time I was at the University of Western Ontario that I really grew. God has his plans.Mary Rose: And now you’re actively involved with Fountain of Love and Life even though you have a full-time job. What’s your biggest motivation to keep going?Donna: Since 2005, when we first started, we’ve been able to really see the interest in the Chinese community, and the support. We really feel that God is leading the way. When we lose hope, He opens up another door. It just keeps growing and growing. And the amount of volunteers we have keeps growing, too. With all the positive signs, we know that God wants this. With the launch on Fairchild TV, we need the funds to get on this. We need to be sustained for a year or more. Since we’re all volunteers and we want to hire more full-time staff, this motivated us to raise as much money as possible and have a really organized professional gala.People in the Chinese community now expect this to be an annual event, an event that allows the Chinese Catholic communities in the four Chinese parishes of the Archdiocese of Toronto to come together.Mary Rose: So….. when’s the next gala?Donna (laughing): When’s the next one? We’re all in recovery mode right now. Besides the gala, we organize different events every year. We have an e-mail address if people want to find out more: chinese@saltandlighttv.org. They can also check out the Salt and Light webpage on Fountain of Love and Life.Mary Rose: Thanks, Donna. I just want to let you know that I really, really enjoyed the feature story that you showed us at the gala. Can you tell me more about how you found this story?Donna: That sounds like my cue, Mary Rose. You’re going to have to ask Paul Yeung and his wife Bonny about that.Mary Rose: Well then, I’ll do that for Part 2 of “But I don’t speak Cantonese!”