In February 2009 my wife and I drove my colleague, Kris Dmytrenko, to the Buffalo, New York airport. He was flying to Rome for work, and giving him a ride to the airport gave us the opportunity to visit a few shrines in the upstate New York area. 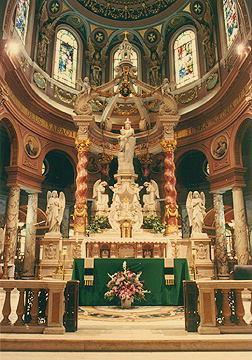 One of the shrines we visited was the magnificent Our Lady of Victory Basilica, in Lackawanna, New York. This stunning minor basilica looks like something out of a European metropolis, and not a small town in a region that has been scarred by economic woes. The man behind the Basilica is Father Nelson Baker. Fr. Baker, who died in 1936 at the age of 95, is a legend in the region, and his cause for canonization opened in 1987. Nicknamed the Padre of the Poor, he was a tireless servant to those in need: his works include operating an orphanage and a home for boys and establishing a home specifically for infants and unwed mothers which went on to become a hospital. As the Great Depression hit in 1929, the apostolates he was involved in, known as the Our Lady of Victory Institutions, served more than one million meals in a year, clothed 500,000 and offered medical care to another 250,0000. The diocesan priest considered Our Lady of Victory his patroness and dreamed of establishing a shrine honouring our Blessed Mother. That dream became a reality when in 1921, at 79 years old, construction began on the Basilica. Fr. Baker hired European artists and architects and imported material from Europe, Asia, and Africa. Parishioners contributed ten dollar blocks for its construction and Fr. Baker appealed to those he knew in the community and throughout the United States. In four years the 3.2 million dollar Basilica was finished... completely debt free! It was dedicated in May of 1926 -- the same year that marked Fr. Baker's 50th anniversary as a priest. The Shrine is quite magnificent. My wife and I were fortunate to have a guide show us around the Basilica, pointing out many facts and figures.  Nearly two years later, I can't recall too many of those facts, but what stays with was the guide's enthusiasm and love not only for the Basilica, but also for sharing the life of Fr. Baker. He mentioned to us how great it would be to see Fr. Baker proclaimed a saint by the Church, but conceded he probably wouldn't see it in his life time. 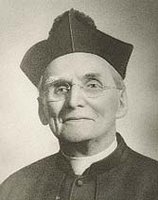 Last Friday, however, Fr. Baker's road to sainthood took a step forward. As you probably know, the Congregation for the Causes of Saints issued several decrees on that day. One of those being the approval of a miracle attributed to the intercession of Pope John Paul II, paving the way for his May 1st beatification. This was also among the decrees, under the heroic virtues heading:

I did a double take when I saw the name, thinking to myself "It's that priest from Buffalo!" And he will now be Venerable Fr. Nelson Baker. The Congregation for the Causes of Saints have officially recognized that he's lived a life of “heroic virtue”, a life worthy for the faithful to imitate.  Though a Venerable doesn’t have a feast day, the faithful are encouraged to pray to them for their intercession. I certainly know of one person who will be praying to him and encouraging others to do so as well! Venerable Fr. Nelson Baker, pray for us! Read more about Fr. Baker and the Our Lady of Victory National Shrine here.