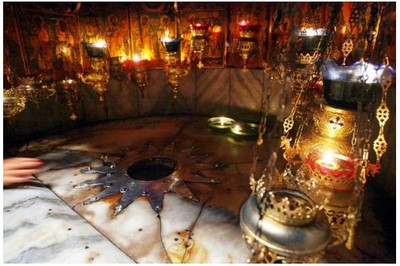 It was around the dinner table at the home of an Austrian friend when I realized that the hills coming alive in Toronto theatres this year is far from being the only Austrian Christmas story touching Canadian hearts. This one may not involve 7 cute children responding to the call of a whistle, but it does however, begin with a child…Every year, in the first week of advent, an Austrian child is chosen to visit the grotto in Bethlehem where baby Jesus was born. Near the manger, he or she lights a candle in the same spot where it is believed the angel appeared singing “peace on earth” in honour of the newborn king of peace. After a quiet prayer, the child then brings the ‘Friedenslicht’ (Light of Peace) to Austrian soil, where it is never extinguished…until after Christmas day. Meanwhile, the light is distributed to several posts across the country that transform themselves into hosts of the Light of Jerusalem (as it is sometimes referred to), one of them being Austria’s television network the ORF. The Red Cross, railway stations, military bases, churches and youth organizations have all become hosts of the Light of Peace. Every year on Christmas Eve, families and individuals are invited to make their way to the closest host station in order to light a candle of their own, to bring back to their homes. This way, the very same light that burns at the grotto of Bethlehem makes its journey into every Austrian home.It has become a symbol of a very old longing for peace, and just as the flame passes from candle to candle and from hand to hand, so too must peace flow from one person to the next.The journey of this light was planned in 1986 as a one-time event, but because of its tremendous success it soon became an annual Christmas tradition for the Austrian people. After the fall of the iron curtain in 1989, the Light of Peace spilled over Austrian borders into Germany. It passed from Western Germany to Eastern Germany and shone brightly at the remains of the Berlin Wall. That same year, the light spread throughout the Czech Republic, Switzerland and Italy. It continued passing from one hand to the next and was eventually received by the world leaders of 25 European countries including our religious leader at the time and peace maker par excellence Pope John Paul II. Although we in the western world may not be able to physically receive the Light of Jerusalem into our homes, let this Austrian Christmas tradition inspire us this year to be the peace makers we are called to be, in our homes, in our families and in our communities.