Book review: The Religion of the Apostles 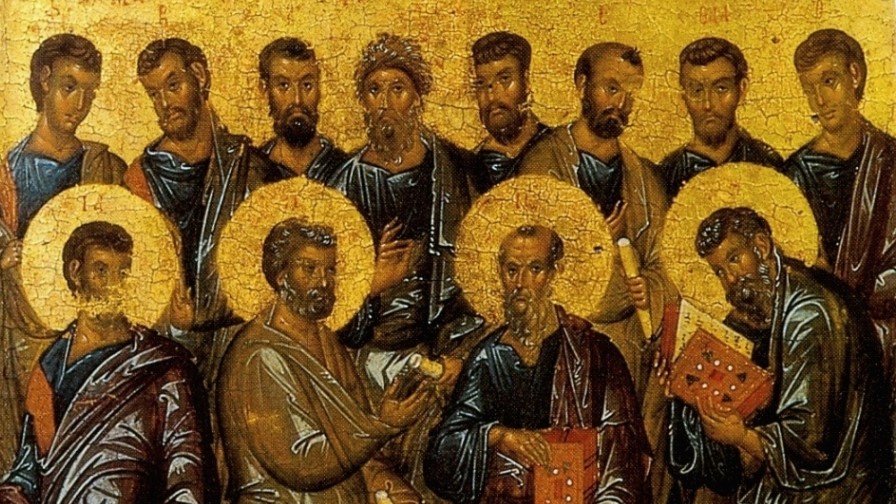 Detail of a 14th-century icon depicting the Twelve Apostles (Source: Wikimedia Commons)
Since its beginnings, the religious landscape of American society has been characterized by great diversity, a multiplication of conceptions of the Christian faith (mostly Protestant), and a history punctuated by successive waves of spiritual awakenings. However, Protestantism and Catholicism, though they account for the majority of Christians in the country, do not exhaust the diversity of American Christianity. The Orthodox Church is also fully implanted in the United States in the form of many particular churches, which are generally linked to the many waves of migration that have made contemporary American society what it is today. It would be wrong, though, to reduce American Orthodoxy to the inheritance of immigration from Eastern Europe, for it also includes a variety of converts of Western European origin. It is to all of these groups and beyond that The Religion of the Apostles: Orthodox Christianity in the First Century, a new book by American Orthodox priest Stephen De Young, seems to be addressed. With a doctorate in biblical studies, Father De Young is the pastor of Archangel Gabriel Antiochian Orthodox Church in Lafayette, Louisiana. He is also the author of The Whole Counsel Blog and host of the podcast The Whole Counsel of God, in which he discusses the Scriptures from an Orthodox Christian perspective. He also co-hosts The Lord of Spirits with Father Andrew Stephen Damick, a radio show about issues related to spiritual beings from an Orthodox Christian perspective. In The Religion of the Apostles, De Young proposes to demonstrate that the Orthodox Church preserves the religion practised by the apostles of Jesus Christ, who were themselves informed by Second Temple Judaism. In a sense, therefore, the book has an apologetic character, although it also aims to educate the interested public about the ancient foundations of the Christian religion, as expressed in Orthodoxy – foundations which, in the author’s opinion, tend to be discarded or discredited in a materialistic contemporary American society. Speaking from a Catholic perspective, my aim here is not to challenge the author's thesis but to highlight the structure of the book and the possible benefits that a Catholic reader can draw from it. Two major benefits – for any Christian reader – include the development of a reenchanted view of the world that is coherent with the Christian faith and a better understanding of its rootedness in Judaic tradition. The Religion of the Apostles is divided into four sections, each subdivided into chapters. First, the author deals directly with the figure of the Godhead in relation to the idea of the Holy Trinity. He offers a thorough argument whose purpose is to demonstrate the continuity between Second Temple Judaism and Orthodox Christianity on this issue. The second part of De Young's book is in my opinion the most interesting and significant. Here he puts forward his conception of the “Divine Council” – the various spiritual beings and realities officiating under the authority of the one true God. With his sophisticated understanding and encyclopedic knowledge, De Young discusses spiritual creatures – angels, demons, saints, giants, gods, etc. – illustrating the depth and breadth of their importance in the Christian conception of the created order by relating them to ancient cosmology. He then attempts to explain the implications of his assertions as regards our understanding of human weaknesses and hopes. The third part of the book focuses on the notions of creation and salvation, explaining the meaning of the idea of atonement as understood in Christianity. Finally, in the fourth and last part, the author addresses the notion of the people of God and its evolution in biblical times. While it obviously showcases certain particularities of Orthodox theology that are not always shared by Catholic Tradition, and while it is built around an argument that one should be tempted to question, De Young's book is also a privileged opportunity to encounter a holistic conception of Creation – material and immaterial – that, while it finds its place in the teachings of the Catholic Church, is no longer named or taken seriously in some of our circles. In a sense, the difficulty that motivated De Young to write this book, namely the impoverishment of the spiritual tradition in contact with Western modernity, is a difficulty shared by all Christians. Thus, keeping in mind the cautions which should be taken by any non-Orthodox reader, I believe this book to be a touchstone worthy of consideration by any Christian looking for a way to enrich their understanding of the spiritual realm.