It’s a feast of the Assumption not soon to be forgotten. 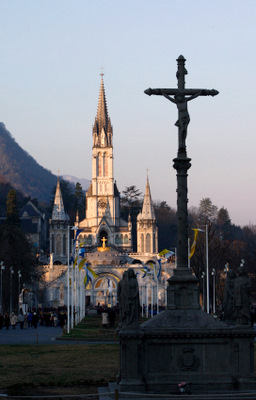 A cruel prank was pulled on over 30,000 pilgrims gathered yesterday in Lourdes, located in southwest France. Police received an anonymous phone call about a bomb threat to the Shrine. The call came in as thousands of worshippers, priests and nuns were congregating for midday Mass. Officials soon began evacuating pilgrims.  It is disheartening to think about the thousands of sick and disabled that had to be ushered out in such a hurried and frightening manner. After thoroughly sweeping the grounds and surrounding areas, army bomb disposal experts found there to be no sign of explosives. A Lourdes spokesman told the press that they have no idea who is behind the threat. “Bomb scares are not something you associate with Lourdes” he added. This is not a solitary incident however. Lourdes was evacuated in 2002 for the exact same reason, another bomb scare. I am deeply relieved and thankful that there was in fact no real threat and that no one was harmed. At the same time, I am saddened by the monumental inconvenience suffered by the pilgrims. Over 900 seriously ill pilgrims were kept in a secure area for five hours, unsure of what would happen to them. Lourdes is meant to be a place of healing, to provide sanctuary and solace to those who visit. There’s a time and place for a funny prank or hoax, this was most definitely not one of them. By what can be called luck or Divine Providence, the Eucharistic procession still started on schedule. Thanks be to God. - CNS photo/Nancy Wiechec