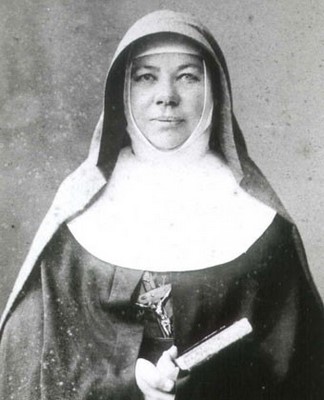 Among the key patron saints of World Youth Day 2008 in Sydney, Blessed Mary MacKillop stands out as being the only native-born Australian.
During her beatification in 1995, Pope John Paul II said that Mary MacKillop embodies the best of Australia and its people: "genuine openness to others, hospitality to strangers, generosity to the needy, justice to those unfairly treated, perseverance in the face of adversity, kindness and support to the suffering." And during World Youth Day 2008, not only did we see Pope Benedict XVI inspired by her as he visited her tomb in north Sydney, we also heard Australian Prime Minister Kevin Rudd express his national pride in Mary MacKillop in his public address! Born of Scottish parents who emigrated to Australia, Blessed Mary MacKillop left a great legacy. Australia owes its Catholic Education system to her and the work of the Congregation she founded in South Australia in 1866 at the age of 24, the Sisters of Saint Joseph of the Sacred Heart. Mary founded this new religious order of women dedicated to the service of the poor especially in isolated country districts. Mary and her Sisters invested their energies into social welfare activities, building orphanages for children and homes of refuge for immigrants and women. Mary was a woman ahead of her time – the Church in Australia had never seen a young nun outside of a semi-cloistered environment be so active in responding to the needs around her! Right after World Youth Day in Sydney, two Salt + Light personalities – Mary Rose Bacani and Kris Dmytrenko – followed in the footsteps of Blessed Mary MacKillop in South Australia. In Kensington, they visited the Mary MacKillop Centre and the Motherhouse of the Sisters of Saint Joseph of the Sacred Heart, as well as one of the schools named after Mary MacKillop, Mary MacKillop College. In Adelaide, they visited the Chapel at St. Mary’s College where Mary MacKillop was excommunicated. In 1871, Bishop Laurence Sheil excommunicated Mary MacKillop from the Church, a sentence which he removed after some months, when he realized his serious mistake. Mary Rose and Kris spoke with the Archbishop of Adelaide, Archbishop Philip Wilson; the former Auxiliary Bishop of Adelaide, Bishop Gregory O’Kelly; a few Sisters of St. Joseph of the Sacred Heart; and young people who have felt the impact of Blessed Mary MacKillop on their lives. Join Mary Rose Bacani and Kris Dmytrenko as they follow in the footsteps of Australia’s first saint-in-waiting – Blessed Mary MacKillop! Tune in to Salt + Light on the following days for the special half-hour program Mary MacKillop: Australia's First Saint.