In 1858, four Sisters of St. Ann traveled from Montreal to Canada’s West Coast aboard the SS Seabird with Victoria’s first Bishop, Modeste Demers (a relative of their current Bishop!).  They made the two-month voyage via a circuitous route through the Isthmus of Panama. Their goal was to aid the Bishop in his mission to the local Aboriginals, and so they began in earnest their work of providing them education and health care.   In 1871 a large brick building, St. Ann’s Academy, was erected and in 1876 Saint Joseph’s Hospital was finished.   In 1941, Mount Saint Mary’s extended care facility was constructed as an extension to Saint Joseph’s Hospital.  It was there in 2005, while studying at the University of Victoria, that I first met the Sisters of St. Ann. 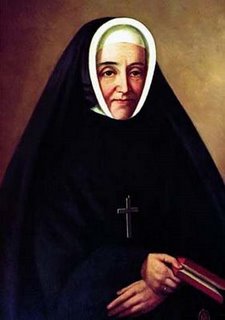 Today, April 18th, is the feast of Blessed Marie-Anne Blondin.  She was born Esther Blondin in Terrebonne, Quebec on April 18th, 1809. Raised in a devout farming family, she learned piety from her mother and unwavering patience in the midst of suffering from her father.  Nineteenth century colonial America was simply about survival and so education usually fell by the wayside.  For Esther it was no different, for at 22 she couldn’t read or write. After briefly working as a domestic in the Convent of the Sisters of Notre Dame, she entered as a novice, however ill health forced her to leave.  At the age of 24 Esther became a teacher in the hopes of helping other children acquire the education they deserve.  The only problem was that, at the time, the Church required separate schools for boys and girls and, unfortunately, many parish communities could not afford two schools. So in many cases no schools were built. At 48, by the inspiration of the Holy Spirit, Esther brought before her Bishop a plan to found a religious community dedicated to the education of poor children, solving the issue of running two schools by simply having boys and girls together in one school.  Her Bishop agreed, and on September 8th, 1850, the Congregation of the Sisters of Saint Ann was formed. Esther, now Mother Marie-Anne, became the first superior of her fledgling community.  God blessed the community with vocations and soon it became apparent that they would need to expand into another motherhouse.  It was at this time that the new chaplain of the community, Fr. Marechal, began taking over control of the sisters’ affairs.  Difficulties between Fr. Marechal and Blessed Marie-Anne led the Bishop to ask for her resignation and her promise not to accept the nomination if re-elected as Superior.  From this point on, and until her death in 1890, Blessed Marie-Anne Blondin lived a life of persecution, forced to perform the most menial tasks in her community and kept out of all administration.  Her sisters were not even able to acknowledge her as their spiritual mother despite several attempts to re-elect her as their Superior! The paradox of Blessed Marie-Anne Blondin’s life is that despite the best efforts of her chaplain and Bishop, she became more useful to the growth of her community. By consciously suffering injustices in reparation for her sins and the sins of her community, she ensured the blessings of God.  Her example becomes all the more poignant during Holy Week, for Jesus himself suffered the most injustices and insults.  Yet God in his eternal wisdom gives some of us the blessing of suffering for his sake.  For St. Paul says in 1 Col 1:24, "I rejoice in my sufferings for your sake, and in my flesh I complete what is lacking in Christ’s afflictions for the sake of his body, that is, the Church.”  During this Holy Week, we would do well to contemplate more deeply Blessed Marie-Anne Blondin’s life and her witness of humble service.