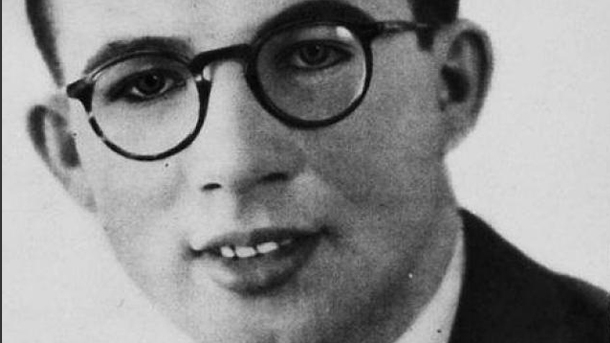 Today is 70th anniversary of death of Blessed Marcel Callo who was one of the patron blesseds and saints of World Youth Day 2002. Marcel Callo was born on December 6, 1921, in Rennes, France, being one of nine children. He was a happy child, who was known to be a leader and a perfectionist. He helped with his household chores and he helped take care of his younger siblings. After completing his primary studies, he became an apprentice to a printer around age 13. He did not like associating with fellow workers who swore and told many improper stories. He preferred accompanying good Catholic friends who belonged to the JOC, Jeunesse Ouvriere Chretienne (Young Christian Worker). He had a good sense of humor and would like to wrestle, play football, ping pong, cards and bridge. When Marcel was 20 he fell in love with Marguerite Derniaux. He did not degrade women like his fellow worker but instead had deep respect for women. He said, "I am not one to amuse myself with the heart of a lady, since my love is pure and noble. If I have waited until 20 years old to go out with a young lady, it is because I knew that I wanted to find real love. One must master his heart before he can give it to the one that is chosen for him by Christ." It took him about one year to declare his love to Marguerite and an additional four months before they first kissed. After being engaged, they imposed a strict spiritual rule of life which included praying the same prayers and going to Mass and receiving the Eucharist as often as they could. 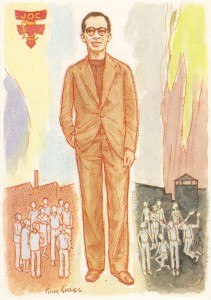 On March 8, 1943, the war (World War II) had gripped their city of Rennes. That day his sister, Madeleine was killed by one of the bombs that leveled her building. When the Germans later occupied France, Marcel was ordered and deported to Zella-Mehlis, Germany to the S.T.O.,Service du Travail Obligatoire (Service of Obligatory Work). If he did not comply, his family would be arrested, so he went. Once there, he worked in a factory that produced bombs that would be used against his own countrymen. After three months or so of missing his family and missing Mass (there was no Catholic church in that town), Marcel became seriously depressed. He later found a room where Mass was offered on Sunday. This helped change his disposition. He reported that, "Finally Christ reacted. He made me to understand that the depression was not good. I had to keep busy with my friends and then joy and relief would come back to me." With his morale and hope restored, he cared for his deported friends. He organized a group of Christian workers who did activities together like play sports or cards. He also organized a theatrical group. He galvanized his friends despite him suffering from painful boils, headaches and infected teeth. For his French friends, he arranged a Mass to be celebrated in their native tongue. Eventually, his religious activities attracted unwanted attention from the German officials. The Germans arrested Marcel on April 19, 1944 saying that, "Monsieur is too much of a Catholic." The Germans interrogated Marcel. He admitted his Catholic activities and was imprisoned in Gotha. He secretly received the Eucharist while in prison and continued to pray and help his companions. He was considered dangerous to the Germans and was moved to a different prison at Mathausen. He suffered from various ailments such as bronchitis, malnutrition, dysentery, fever, swelling, and generalized weakness. He never complained. Despite his suffering, he encouraged his companions by saying, "It is in prayer that we find our strength." He died on the feast of St. Joseph, March 19, 1945. The date was exactly two years from the day he left home.Pope John Paul II beautified Marcel Callo on October 4, 1987 along with two Italian martyrs, Antonio Mesina and Pierina Morosini. Courtesty of: http://www.savior.org/saints/callo.htm