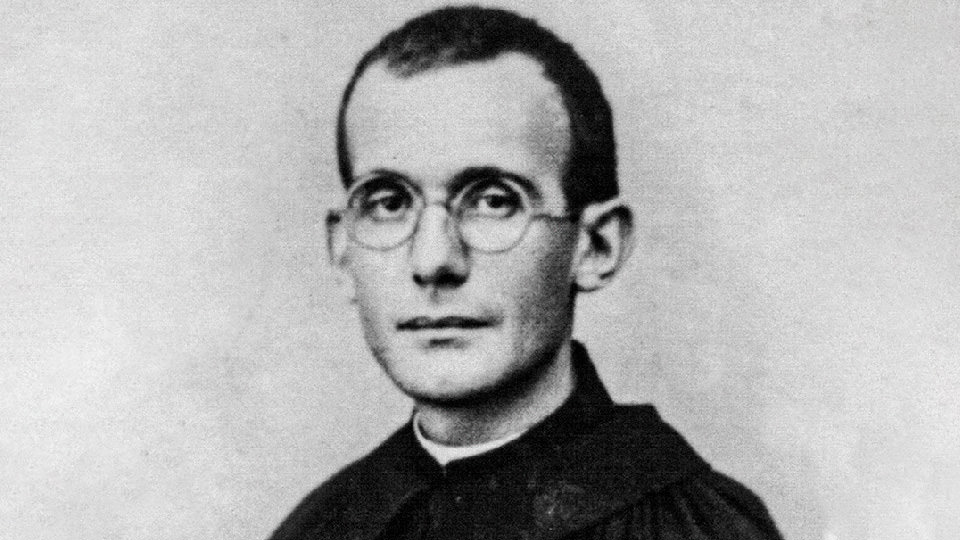 Blessed Justin Russolillo will be canonized on May 15, 2022.
Saintly beginnings Giustino (Justin) Russolillo was born one unusually snowy January day in 1891 in the town of Pianura near Naples. The third child of ten born to a bricklayer and a seamstress, Justin grew up in a poor but pious family and was recognized from an early age for his intelligence and his piety. From boyhood he felt a clear and strong call to the priesthood, though his family’s poverty prevented him from pursuing his vocation in a simple and straightforward way. But recognizing the sincerity of his vocation, his family made sacrifices in order to send him to the seminary.   A vocation toward vocations During his ordination to the priesthood on September 20, 1913, young Fr. Justin made a private vow to found a religious order dedicated to searching out young men and boys with possible vocations to the priesthood and assisting them both in the discernment process and in entering diocesan seminaries and religious orders. From his own personal story and from his experience as a seminarian catechizing local youth, Fr. Justin understood the terrible burden of poverty and realized that one of the great obstacles to increasing the number of priests was not a lack of vocations or a lack of will but a lack of financial means. Seven years later, he at last found the opportunity to pursue that dream when he became the pastor of St. George’s parish in his hometown of Pianura. Here he founded the first Vocationary – a place where boys and young men could discern vocations to the priesthood and receive the appropriate training for free. From these humble beginnings grew two religious orders – the Vocationist Fathers and the Vocationist Sisters – and a secular institute, the Vocationist Apostles of Universal Sanctification. This “Vocationist family” continues to carry out its founder’s mission of identifying and fostering vocations in 18 countries on five continents.   A unique spirituality As well as being extremely active with an apostolic zeal, distinguishing himself as a pastor, catechist, preacher, and writer, Blessed Justin Russolillo was also known for his great humility and holiness and a unique spirituality focused on the Trinity. He understood that every human being, having been made in the image and likeness of God, is called to spousal union with the Trinity. Holiness is not only for a few great saints or even for those called to priesthood or religious life but for everyone. Each one of us is called in a limited, finite way to reflect the infinite goodness of the Trinity, and we do this by each responding to God’s call of love and carrying out the unique service entrusted to us. Our whole life should be oriented toward a union with our Trinitarian spouse.   Blessed Justin Russolillo died of leukemia on August 2, 1955, in Pianura.   Miracles The miraculous healing of Gaetanina (Ida) Meloro from cancer in 1998 in the US led to Fr. Justin’s beatification by Pope Benedict XVI in 2011. The miracle for his canonization took place closer to home: In 2016, Jean Emilie Rasolofo, a seminarian from Madagascar who was with the Vocationist community in Naples, suddenly fell severely ill and was taken to hospital in a coma. The Vocationist family around the world prayed for Blessed Justin’s intercession, and within days, Jean Emilie made a rapid and otherwise inexplicable recovery.   Possible patronage Soon-to-be-canonized St. Justin Russolillo will clearly be the appropriate patron for the entire Vocationist family, who will be celebrating the event with great joy. But he would also be a good saint to turn to for anyone currently undergoing vocational discernment, especially if they face obstacles, and for those assisting such individuals. Fr. Justin identified a major obstacle which, in the time in which he lived, prevented boys and young men from pursuing or even considering a vocation to the priesthood. The obstacle of poverty is still a reality for many, and the Vocationist family he left behind continues his mission all over the world. But there also exist other obstacles – no less real for being less tangible. Perhaps we as a Church, as we pray for an increase in vocations, might also ask for the intercession of St. Justin for the enlightenment of our minds in recognizing and eliminating these obstacles.