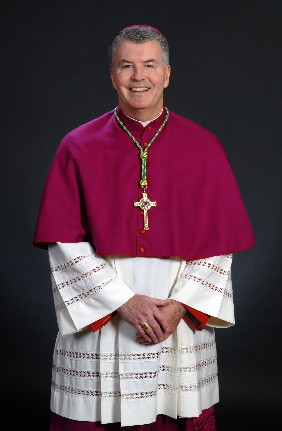 Picture the activity right now at St. Peter’s Cathedral in London, Ontario: hundreds of bishops, priests, deacons and altar servers pray as they don their vestments, eager ticket-holders arrive to claim their pews, and one man prepares to assume the office of bishop.
Momentarily, Fr. William McGrattan will process towards his ordination as the fourth Auxiliary Bishop of the Archdiocese of Toronto. Though the pews will be full, you can still witness this special Mass: S+L will stream the liturgy live online. The webcast begins at ordinations.saltandlighttv.org at 2:50 pm. (The ordination will be televised Saturday at 8:00 pm, followed by encore presentations Sunday at 12:30 am & 9:00 am.) Take note of who will be carrying the episcopal symbols. S+L’s Pedro Guevara Mann and Mary Rose Bacani were asked to process with the new bishop’s mitre, while two Sisters of the Precious Blood, Sr. Carol Forhan and Sr. Eileen Mary Walsh, will bring forward his ring. The crosier will be carried by students of St. Peter’s Seminary, where Fr. McGrattan served as rector for twelve years. For more information about Bishop-elect McGrattan, as well as an helpful explanation of the ordination liturgy, published below is the official media advisory.

Seminary Rector to be Ordained a Bishop January 12 London native Rev. William T. McGrattan, 53, will be ordained auxiliary bishop for the Archdiocese of Toronto in a traditional ceremony attended by nearly than 1,000 people, including his family, friends, parishioners, 35 cardinals and bishops and more than 150 priests. Pope Benedict XVI named Father McGrattan as auxiliary bishop to assist Archbishop Thomas Collins in the administration of the Archdiocese of Toronto, which serves as the spiritual home to 1.9 million Catholics and with Mass in more than 30 languages each week at 223 parishes. Bishop-elect McGrattan becomes the tenth priest of the Diocese of London to become a bishop since it was established in 1856. The Mass of Ordination is steeped in tradition and history. Pope Benedict XVI’s letter of appointment will be read. Bishop-elect McGrattan will commit to fulfilling the role of bishop (to teach, sanctify and rule) and will lay prostrate on the ground in humility. The bishops will lay their hands on his head, welcoming him into their ranks for service to the Church and praying silently for God’s abundant blessing. Bishop Fabbro will pray a third-century prayer of consecration and anoint the new bishop’s head. Finally, he will receive the signs of his new office: the Gospel (responsibility to preach); ring (authority and marriage to the Church); miter (tall hat representing his call to be a herald of truth); and crozier (staff representing his role as spiritual shepherd). The seating of the new bishop conclude the ordination rite, acknowledging his unity with the other bishops and his participation in the leadership of the Catholic Church. Bishop-elect McGrattan, 53, was born and raised in London. He completed a Bachelor’s of Engineering Science in Chemical Engineering from the University of Western Ontario in 1979. Upon graduating, he worked as a chemical engineer for Polysar Limited in Sarnia for three years before entering the St. Peter’s Seminary in 1982. He was ordained a priest in 1987 after completing his theological studies at St. Peter’s. Following his first assignment as associate pastor at St. Joseph, Chatham from 1987-1990, he went to Rome for studies, receiving an S.T.L. (Licentiate in Fundamental Moral Theology) from the Pontificio Universita Gregoriana in 1992. Bishop-Elect McGrattan has served at St. Peter’s Seminary in various roles since 1992, as lecturer, associate professor, vice-rector and dean of theology, teaching fundamental moral theology, sacramental theology and religious studies. He has been rector since 1997 and was named Episcopal Director of Formation and Support for the Diocese of London in 2007.