Following his speech at the German lower parliamentarians, Pope Benedict XVI  met with Representatives of the Jewish Community. The Holy Father remembered the Shoah: "Today, I find myself in a central place of remembrance, the appalling remembrance that it was from here that the Shoah, the annihilation of our Jewish fellow citizens in Europe, was planned and organized. Before the Nazi terror, there were about half a million Jews living in Germany, and they formed a stable component of German society.”
Here is his full address: 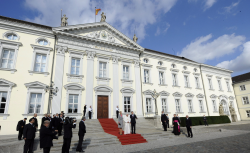