"Behold the handmaid of the Lord": Feast of the Assumption of the Blessed Virgin Mary 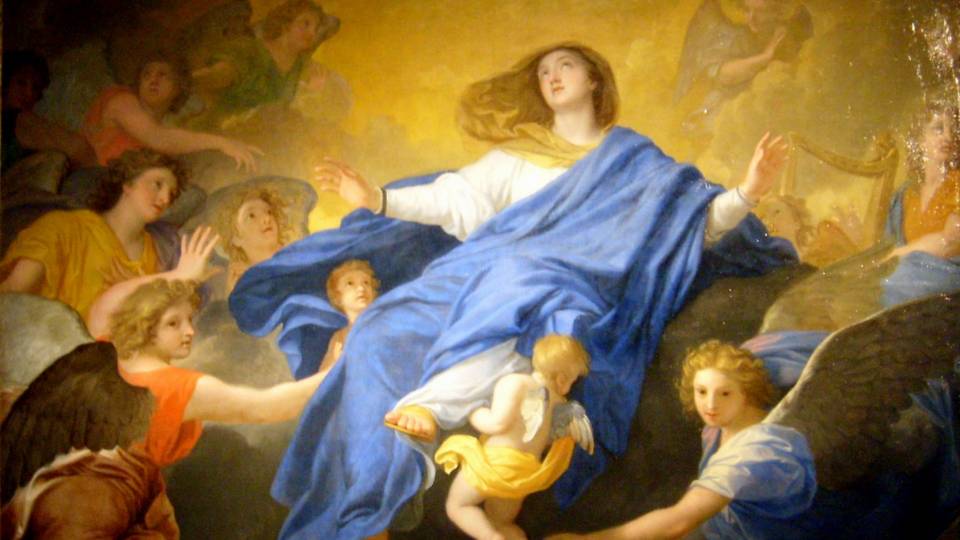 The Assumption of the Virgin by Charles Le Brun. Source: Wikimedia Commons

“All generations shall call me blessed; because He who is mighty has done great things for me.” Luke 1:48-49

The Feast of the Assumption of the Blessed Virgin Mary is celebrated on the 15th of August, and is regarded as the most important Marian feast day in the Church’s calendar. It celebrates Our Lady being assumed body and soul into heaven after the end of her earthly life. As the mother of God Incarnate, her role in God’s plan of salvation is central, and as a result, she joined her Divine Son in Heaven at the conclusion of her mortal life. In Eastern Catholic and Orthodox Churches, the feast day is referred to as “The Dormition of the Theotokos”, in which the Blessed Virgin Mary is believed to have “fallen asleep”, meaning her mortal body died, and like Christ her son, she rose again in glory on the third day before being assumed into Heaven. The Latin rite of the Catholic Church does not specify whether or not the Blessed Virgin Mary experienced earthly death before she was assumed into Heaven, body and soul. It is generally accepted that she did die and was resurrected by God, but many Catholics believe she was assumed into heaven never having died, and there are no definitive teachings on her earthly death, either way. The Assumption of the Blessed Virgin Mary was proclaimed dogma in 1950 by Pope Pius XII, making it an infallible teaching of the Church. While this seems relatively recent, the belief in the Mother of God entering eternal glory after her earthly death has been a part of Christian tradition since the early centuries, and she has always taken a significant role in the Catholic faith. The early importance of the Blessed Virgin Mary to the life of Christians was especially evident in 431 AD at the third ecumenical council, the Council of Ephesus. This council confirmed the Niceno-Constantinopolitan Creed of the first two councils, but also condemned the teachings of Nestorius, who wanted to distinguish between Christ’s human and divine natures, and claimed that the Blessed Virgin Mary should have the title of Christotokos (“Christ-bearer”) rather than Theotokos (“God-bearer”). It was decided that Christ was both fully divine and fully human, and the two natures were inseparable, so the role of the Blessed Virgin Mary as the Mother of God was affirmed. As the Mother of God, the Blessed Virgin Mary has always been the subject of intense devotion. She was an exceptionally holy and sinless human being chosen by God to be the bearer of His Incarnate Word, making her instrumental in the salvation of the world. When the angel Gabriel visited her and told her she was to conceive the Son of God by the Holy Spirit, her response was to say: “Behold the handmaid of the Lord; be it unto me according to thy word,” expressing her great faith and obedience to the will of God. For this reason, early Church Fathers like Augustine of Hippo and Origen of Alexandria viewed the Mother of God as the new Eve in a similar way to how Paul’s epistle to the Romans describes Christ as the second Adam, contrasting the disobedience of Adam to Christ’s obedience to the Father. Through her obedience to God, Our Lady begins God’s plan of salvation that reconciles creation to God after the fall that resulted from the first disobedience of Adam and Eve in the Garden, crushing the head of the serpent beneath her feet. Our Lady is the gate through which God enters into temporal existence, taking on our nature and sanctifying humanity and all of the created order. The Gospel reading for the Feast of the Assumption comes from the first chapter of Luke, when Our Lady is greeted by her cousin Elizabeth, who has conceived a child in her old age, and Elizabeth says to her, “Blessed are you among women, and blessed is the fruit of your womb.” Our Lady’s response is the passage traditionally known as the Magnificat. She proclaims an inversion of the social order, in which the mighty are knocked down and the humble are raised up, the hungry are fed and the rich are sent away empty, echoing the Song of Hannah from the first book of Samuel from the Old Testament. The Magnificat that Our Lady sings foreshadows the Kingdom of God that her Son is to bring, fulfilling the covenant that God made with Abraham and his descendants. The fulfillment of the covenant through the incarnation of the Divine Logos all begins with Our Lady’s assent to be the Mother of God. The Feast of the Assumption is Our Lady’s primary feast day because it celebrates her assumption into Heaven as the Mother of God and as one of the first humans to achieve salvation and eternal life through her Son the Redeemer. With her assumption, her role as the God-bearer is fulfilled, and she is crowned in glory as Queen of Heaven, the most holy of the saints, and the human being dwelling closest to God the Trinity, interceding for us. Because of this, the Blessed Virgin Mary has a special place in the devotion of Christians, and she provides an example of perfect faithfulness and obedience to God for us to emulate.

What shall we call thee, O thou who art full of grace? Heaven, for from thee hast dawned forth the Sun of Righteousness. Paradise, for from thee hath blossomed forth the flower of immortality. Virgin, for thou hast remained incorrupt. Pure Mother, for thou hast held in thy holy embrace the Son, the God of all. Do thou entreat Him to save our souls. - From an Eastern hymn to the Most Holy Theotokos