Behind Vatican Walls: Week Two of Synod of Bishops on the Family 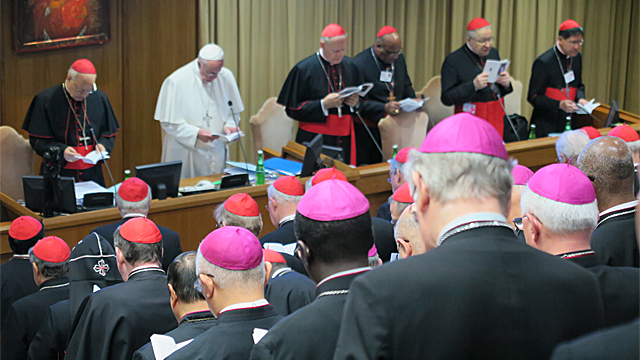 As discussion inside the Synod hall turned to issues that brought out personal stories and anecdotes from many participants, there was, according to the Vatican press office, an in-depth discussion around around divorced and civilly remarried Catholics and various calls for a better approach to marriage preparation.
At least one member proposed that there should be some sort of commission set up after the synod to study the issue of divorced and remarried Catholics in depth, over time. It will be up to Pope Francis to decide if he wants to take that approach, and how.
Other interventions also focused on families without children, adoption and the reality that even some Catholics resort to artificial contraception. One auditor explained that Catholic couples who decide not to have children most often do so because of external constraints i.e. economic limitations, and not selfishness. This echoes what many bishops pointed out at last year’s synod: young couples who don’t get married often make the decision because they simply don’t have the economic means to provide for themselves.
Canadian Synod auditor Moira McQueen spoke of the role of the elderly in the family and pointed out that in the third age of life people often return to the practice of their faith after long absences. How then does the Church support these prodigal sons and daughters?
Outside the Synod Hall
Meanwhile outside the Synod hall there are reported developments on other delicate issues. UCANews reported that Chinese and Vatican officials have met in Beijing. While details are sparse, the news is ground breaking.
--
This weekend all eyes will be on St. Peter’s Square for two significant celebrations:
On Saturday October 17, there will be a prayer vigil to mark the 50th anniversary of the institution of the Synod of Bishops by Pope Paul VI.
On Sunday October 18, Pope Francis will celebrate Mass for the canonization of Blessed Louis Martin and Zelie Guerin, the parents of St. Therese of Lisieux. Pope Francis has said that they set the example that led Therese to sainthood.
--
Anyone who has ever visited the Vatican and taken an evening stroll along Via della Conciliazione knows there are fair number of homeless people living around St. Peter’s. This week a men’s shelter with 34 beds opened a block away from the basilica. The building is owned by the Jesuits and the shelter is funded by the papal almoner and staffed by the Missionaries of Charity. Pope Francis stopped by to visit and meet the men already living there.
--
Photos c/o Gabriel Chow
Watch this week's Vatican Connections below:

Every week brings new, exciting, and sometimes juicy headlines from behind Vatican walls and every week Alicia delves deeper into one of those headlines. For a full run down of what’s been happening behind Vatican walls, watch Vatican Connections. Already watch the program? Come back every Fridayfor an in-depth look at an issue, headline or person. Season 4 of Vatican Connections airs Friday nights at 8:00 pm ET.