Behind Vatican Walls: The Legacy of John XXIII 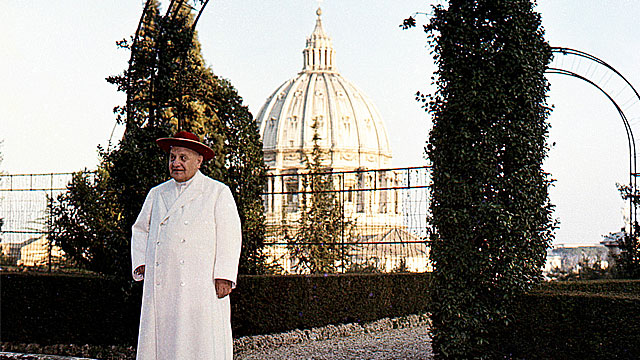 CNS photo/Catholic Press Photo This week marks 53 years since St. Pope John XXIII died at the Vatican at age of 81. For most people, the first thing that comes to mind at the mention of the saintly pope’s name is the Second Vatican Council. Yet his pontificate and his priestly ministry left its mark on the church and the world in many different ways. When the elderly pope opened the Second Vatican Council, tension between the United States and the Soviet Union was steadily escalating. Just days after the pope’s famous speech from his window on the opening night of the Second Vatican Council, a U.S. spy plane spotted and confirmed the stockpile of nuclear arms in Cuba; a discovery that would bring the world to the brink of nuclear war and mutually assured destruction. This was a pope who had seen firsthand the disastrous effects of war. As a young priest, Father Angelo Roncalli served as a military chaplain in a hospital in Bergamo. He knew firsthand the devastation a conventional war could bring about; let alone a war where mutual destruction of both adversaries was assured. During the second world war Fr. Roncalli served as nuncio to various European and Balkan countries. He knew from experience there was always some way, some key to diffusing even the most delicate of political situations. Tensions mounted as both sides reinforced their stock of weapons waiting for the other to “blink” first. Finally Pope John XXIII decided it was time to step in. On October 25, 1962 the pope took to the airwaves of Vatican Radio with a message titled For Peace and Fraternity Among Mankind. He did not name the world leaders he hoped to address, he did not invoke his papal authority. The pope simply gave voice to the fears of every man, woman and child who had been following the developments off the coast of Cuba. “May they, with hands on their chest, hear the anguished cry that rises up to the heavens from all corners of the earth, from innocent children and the elderly, individuals, communities: Peace, Peace!” This message, this plea for peace delivered as spokesperson for all of humanity had the intended effect. Scholars agreed it gave the Soviet leader Nikita Khrushchev and United States President John F. Kennedy a graceful way out of the standoff without the appearance of having chickened out. Within days, the Cuban Missile Crisis was over. Nuclear war was averted. From that message to world leaders on behalf of all of humanity sprung the idea of an encyclical on world peace. Pacem in Terris was published just seven months after the Cuban Missile Crisis, addressed to all men and women of goodwill. Watch this week's episode of Vatican Connections below!