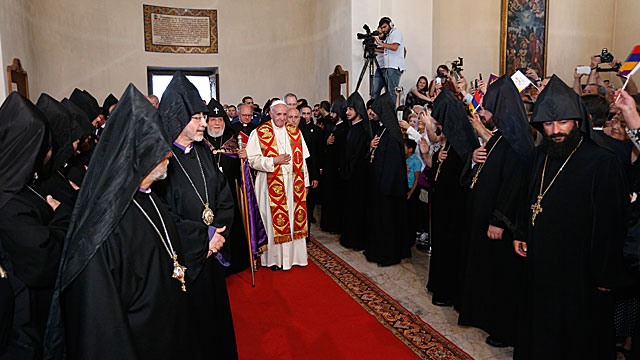 Pope Francis landed in Armenia this Friday for a weekend visit that includes a stop at the Armenian Genocide Memorial, his participation in a Divine Liturgy in the Armenian rite, and a visit to the Khor Virap monastery not far from the Turkish border. The first item on the papal itinerary was a visit to the Apostolic Cathedral of Yerevan. Armenian Catholicos Karekin II and Pope Francis prayed Psalm 121 together, before turning to the formal greetings. Addressing the Catholicos and Armenian Apostolic clergy, Pope Francis said, “I bow before the mercy of the Lord who willed that Armenia should become, in the year 301, the first nation to accept Christianity as its religion” at a time when religious persecution was rampant. The pope added “May the Lord bless you for the luminous testimony.” Turning his attention to ecumenical relations between the Catholic Church and the Armenian Apostolic Church, the pope said “when our actions are prompted by the power of Christ’s love, understanding and reciprocal esteem grow, a fruitful ecumenical journey becomes possible.” From there Pope Francis went on to the presidential palace for a courtesy meeting with Armenian President Serzh Sargsyan. He recalled the anniversary of Armenia’s independence, and the liturgy celebrated at the Vatican by Catholicos Karekin II to commemorate the 150th anniversary of what Armenians refer to as “the great evil.” Pope Francis used the Armenian phrase “Metz Yeghern.” The pope reiterated his admiration for the way, in the darkest moments of their history, Armenians found the strength to carry on in the cross of Christ. The first day of the pope’s Armenian voyage concluded with a private meeting between Pope Francis and Catholicos Karekin II. Watch this week's episode of Vatican Connections below!