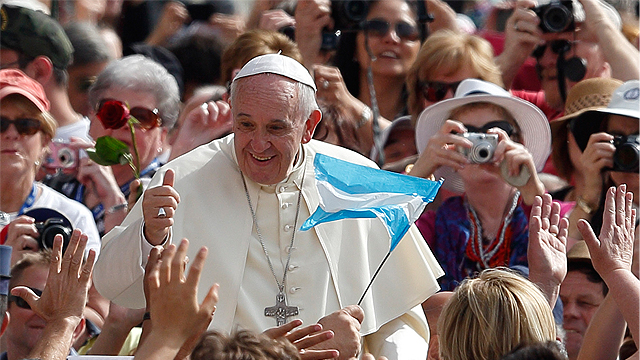 The Vatican received a who’s-who of international leaders, each one bringing their own agenda and a unique assortment of gifts. In the span of three days, leaders from Argentina, Russia, and Canada came to visit, with a delegation of bishops from Latvia and Estonia squeezing in for an Ad Limina visit.
Russian leader Vladamir Putin brought the pope a picture of the Church of Jesus Savior, which was recently rebuilt in Moscow. Argentina’s president, the highly styled Cristina Fernandez de Kirchner, showered the pope with gifts. She brought a basket of Argentine foods (almost certainly Yerba mate, Dulce de Leche, and Alfajores), a picture of Blessed Oscar Romero painted by an Argentine artist, and several books: one about MercuSur, the South American common market organization, one about Argentina architecture, and a copy of the epic Argentine poem “Martin Fierro” which has been quoted by the pope on various occasions.
Given that when the pope mentions a book it becomes a best-seller, what is this “Martin Fierro”? Written in 1872 by Jose Hernandez, the 13 canto poem traces the path of a content but poor gaucho Martin Fierro. He is taken from his quiet life on the Pampas by the government and forced to help protect the country’s border from natives because he failed to vote in the last election for the local judge. Fierro is a poor gaucho, but life in the government fort is even worse than anything he’s known before: he and his fellow gauchos live in squalor and are treated brutally. Eventually Fierro’s rebellious streak kicks in and he deserts his post. Returning home he discovered his wife, children and home are gone. With nothing left, he wanders the Pampas alone.
Eventually, while in a humble drinking establishment, Fierro gets into a knife fight and kills a man. Sought after by the police, he flees and becomes a fugitive. Along the way he meets Cruz, a police officer who more attracted by Fierro’s ideals than keeping law and order. To avoid being captured Fierro and Cruz make their home among the natives.
A second poem, “The Return of Martin Fierro” sees the two men emerge from their exile. Fierro finds his two sons who are now grown and gives them his long-overdue fatherly guidance. The lessons he teaches and the advice he gives are core Christian values: hold firm to your faith in God, help the poor and aged, work hard, respect women. The poems are considered an expression of the Argentine national identity: God-fearing people who keep their head down, work hard, treat others well, yet are mistreated by those with power and money. At the same time the poems were considered a warning against the European ideas being introduced to the country. *** The renowned Italian composer and director Ennio Morricone has composed a Mass for Pope Francis and the 200th anniversary of the restoration of the Jesuit order. A concert presenting the new Mass setting was held at Rome Il Gesu church this week. The concert was recorded by Italian state broadcaster RAI and will be available on the Rai5 website. Watch this week's Vatican Connections below.