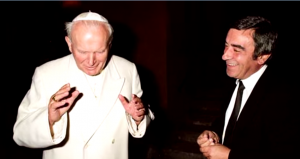 It’s March 11, 1956 like many other young men at the time, a 16-year-old was getting ready to start his first day of work. This young man was born and raised in Rome’s Borgo neighbourhood. He really hadn’t had much chance to ever leave that neighbourhood. What’s more, his new job would only take him around the corner. His new job was at the L’Osservatore Romano Photo Service, just inside the Vatican walls he walked by every day. This young man could never have imagined that his new job would eventually take him around the world, camera in hand, to photograph six popes.
That 16-year-old boy was Arturo Mari. Today he is known as “the pope’s photographer” even though he gave up that job in 2007.
Mari learned the art and skill of photography as a young boy. At the age of six he would follow his father - and amater photographer - into the darkroom and help develop photos. He honed his skill and his eye at the Vatican newspaper’s photo desk. His first assignment: capturing an image of Pope Pius XII being carried on the “sedia gestatoria”, wearing the papal tiara, during a beatification ceremony. He took the photo and - as per protocol - quickly stepped back into the shadows.
He must have done well because he lasted through the rest of Pius XII’s papacy. He was still around when John XXIII called the Second Vatican Council. When Paul VI started making trips abroad, Mari was right there documenting his voyages. By the time Karol Wojtyla was elected pope, Mari was the official papal photographer.
“I lived side by side with that man from the first day [of his pontificate] to the last,” Mari told Salt and Light in a recent interview. Never was there a dull moment.
The long hours with nary a sick day or day off taken, meant Mari was witness to some of the moments that defined the papacy of John Paul II: in 1981 when the pope was shot in St. Peter’s Square, Mari kept snapping away. Some years later, in Italian media interviews, he said “I don’t remember how I took those photos.” In fact, the only time Mari attended a Vatican event without his camera in hand was in 2007 when his son, Juan Carlos, was ordained a priest by Pope Benedict XVI.
It was that same year Mari finally retired passing on the job of Papal Photographer to his nephew, Francesco Sforza who learned the craft acting as his uncle’s shadow.
Watch this week's episode of Vatican Connections here:

Every week brings new, exciting, and sometimes juicy headlines from behind Vatican walls and every week Alicia delves deeper into one of those headlines. For a full run down of what's been happening behind Vatican walls, watch Vatican Connection. Already watched the program? come back every Friday for an in-depth look at an issues, headline or person.