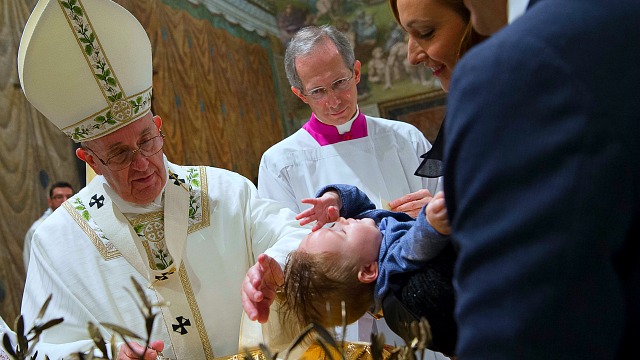 With the Christmas season officially over, this week the Vatican got back to business. Pope Francis had a full slate of meetings this week with a wide variety of guests: the priests from the Argentine College, the nuncios to Zimbabwe, Bosnia and Herzegovina, as well as the papal delegate to Palestine and Jerusalem and a group of bishops from Peru. He also met with the Chairman of of Alphabet, the company that owns Google, and paid an unscheduled visit to a retirement home in Rome.
The meeting that church watchers were keeping on this week, however, was not a Vatican-meeting. The leaders of the Anglican Communion were gathered in England to discuss the issues that have caused division among the 38 provinces of that church. Specifically the provinces do not see eye to eye on issues around sexuality and the ordination of women bishops. The U.S. province, known as the Episcopal Church has elected women bishops, and opened ordained ministry to gay and lesbian members of the church. Both moves caused a strain in relations with the other Anglican provinces and led some Episcopal parishes to become part of other provinces.
As a result of the week long meeting the Anglican primates decided to sanction the Episcopal church. For the next three years Episcopal clergy will not be able to represent the Anglican Communion on ecumenical and interfaith panels nor will they have decision making roles within the Anglican Communion. This could have significant impact on the Anglican - Roman Catholic Theological Consultation in the U.S. The announcement has also sparked anger among some Anglicans in various provinces of the communion.
That same meeting also brought positive signs for Christian unity worldwide. At a press conference Archbishop Welby told journalists the Anglican primates agreed to join in on trying to unify the dates for Easter.  He said he discussed the idea with Coptic Orthodox Pope Tawadros II in Cairo last year. Pope Tawadros has been discussing the idea with Pope Francis and the Ecumenical Patriarch Bartholomew. The Coptic leader has proposed fixing the date for Easter at the second or third Sunday in April.
* * * *
Next week is the Week of Prayer for Christian Unity, marked by Christian churches around the world. Watch for ecumenical prayer services and other events taking place this week in your city. Pope Francis will celebrate a vespers service on January 25 to close the week.
The International Eucharistic Congress takes place January 24 to 31 in Cebu, Philippines. Prelates from around the world will be in Cebu giving talks and catechesis. Pope Francis is not attending the congress. Watch here for information about the event as it happens.
Watch this week's episode of Vatican Connections below:
--
CNS photo/L'Osservatore Romano, handout
Every week brings new, exciting, and sometimes juicy headlines from behind Vatican walls and every week Alicia delves deeper into one of those headlines. For a full run down of what’s been happening behind Vatican walls, watch Vatican Connections. Already watch the program? Come back every Friday for an in-depth look at an issue, headline or person. Season 4 of Vatican Connections airs every Friday at 8:00 pm ET.