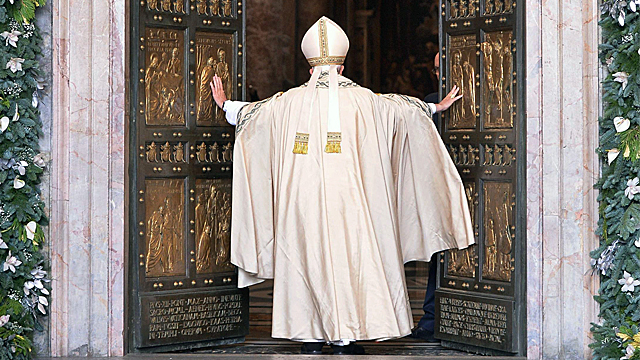 The Jubilee for Mercy is officially open and with it, so too are holy doors around the world. The Vatican inaugurated the holy year with the ceremony for the opening of the holy door. Adding to the festivities was a three hour light show called Fides Lux: Illuminating Our Common Home. Inspired by Pope Francis’ encyclical Laudato Si, the light and sound show used the facade of St. Peter’s as a screen on which images of the natural world were projected.
While the Pope Francis and Pope Emeritus Benedict XVI were opening the Holy Door at St. Peter’s, marriage tribunals around the world were rolling out the new nullity norms decreed by Pope Francis earlier this year. The new norms simplify the annulment process, eliminating the need for a second court to confirm a nullity ruling. If you missed our segment on the new norms and want details, you might want to watch this segment from our September 15 program.
One question posed by diocesan marriage tribunals was “what about the Roman Rota?” the Holy See court that also rules on nullity cases. The Roman Rota followed a slightly different procedure. Pope Francis took care of that too, issuing new norms for the Roman Rota on December 11.
The Pontifical Commission for Religious Relations With the Jews released a new document outlining the milestones in relations between the two faiths, and the theological issues that have arisen during the dialogue process. The document also looks at the meaning of the Word of God in both faiths, the relationship between the Hebrew Scriptures and the New Testament, and the relationship between God’s covenant with Israel and the New Covenant. The document has been published on the Vatican website and can be read here.
The story getting the most headlines, however, is the so-called “Vatileaks” trial. Five people are being tried in a Vatican court for leaking private documents, including a monsignor and a laywoman who served on the Vatican’s commission to study the financial and administrative functions of the Holy See. The trial has already taken several interesting twists. This week lawyers for all parties made various requests, including a request to have email, text messages and Whatsapp message retrieved from defendant’s personal devices. To allow the technical specialists adequate time to retrieve the material, and lawyers sufficient time to review the material, the trial has been put on hold for two months. Hopefully that means for the next two months there won’t be any more plot twists. Though it is not farfetched to expect the trial to take soap opera-like turns once everyone is back in court.
Watch this week's episode of Vatican Connections below: